Plants of the Bible: Bay (Laurus nobilis) or Cedar of Lebanon (Cedrus libani)

The Hebrew word  אזרח‎ (ereh) has been translated in various ways but actually means native born, i.e. a tree not transplanted, but growing on its native soil.  Some authors assumed that a native tree would grow luxuriantly and translated the word in such a way.   On the other hand, the bay laurel (Laurus nobilis) is native to Palestine and and cedar of Lebanon was well known and mentioned by name several times in the Bible so either was a possble translation of the general term  אזרח (ereh) in this place.  The trees are  different in many ways.

Also known as sweet bay, this aromatic evergreen tree is native to  the Mediterranean region. It grows up to 6-‘ in the wild but 5’ in a pot and have glossy, thick, leathery, dark green leaves that are 2-4″ long and elliptical to oval. Clusters of small male and female yellow flowers appear in spring on different trees and are followed by shiny black or purple berries on polinated female plants.  The leaves are used fresh or dried as a culinary herb.  The genus name, Laurus, is the ancient Latin name for the plant.  The specific epithet, nobilis, is the Latin word meaning excellent or noble.

Cedar of Lebanon is an evergreen tree native to the eastern Mediterranean basin. It grows up to 100′ tall and has a beautiful sculptural form with a thick trunk that can be over eight feet in diameter and a cone-shaped crown that broads and becomes tiered with age. The grayish-brown bark develops fissures as it matures. The horizontal branches are of two types: long ones that form the framework of the tree, and short ones that bear most of the leaves and cones. The dark green to bluish green leaves are 1.5-2.5 inches long and borne spirally on the long stems but in clusters of fifteen to forty-five on the short stems. The upright cones grow singly at the tips of the short branches with the grayish-green cylindrical male cones reaching 1.2 to 2 inches in length and the roundish female cones 2-5 inches in length. The female cones are at first green but become brown as they mature and release their winged seeds twelve months after pollination.
END_OF_DOCUMENT_TOKEN_TO_BE_REPLACED

Rubarb (Rheum spp) is a genus of about 60 species and in the buckwheat family, Polygonaceae, that includes sorrel, sea grape, and the pesky Japanese knotweed. Rheum species have large deciduous triangular leaves with long fleshy stems (petioles) and although the leaves are toxic, the petioles are not. The flowers are small and carried in leafy panicles . Some species have been cultivated for their herbal qualities, others for food, and still other for their ornamental value in the garden. Rubarbs like fertile, moist soil and plenty of direct light. Rhubarbs are generally cool weather plants but hardiness varies with the species. END_OF_DOCUMENT_TOKEN_TO_BE_REPLACED

Native to the moist woodlands of Japan, this deciduous woody vine belongs to the hydrangea family, Hydrangeaceae, that also includes mock orange and Deutzia.  The vines grow 20-30′ long and climb by means of  aerial roots.  The reddish brown stems carry heart-shaped, dark green leaves that are toothed, 3-6″ long, and turn yellow in the fall.  Flat-topped, lace-cap clusters of flowers appear in early summer.  They are  8-10″ across and consist of very small creamy white fertile flowers surrounded by showy sterile florets with a single ovate white petal-like sepal. The vines are slow to establish but are beautiful climbing over, rocks, trees, walls, arbors, and other garden structures.  The genus name, Schizophragma, comes from the Greek words σχίζω (schizo) meanng to split and φράγκμα (phragma) meaning a fence and refers to the inner wall of the fruit capsule. The specific epithet, hydrangeoides, refers to the resemblance of the leaves those of hydrangeas.   END_OF_DOCUMENT_TOKEN_TO_BE_REPLACED

Rosary pea is an evergreen woody vine native that grows ten to twenty feet long and often climbs over small trees and shrubs. It has a deep root system, slender branches, and two to five inch long leaves that are pinnately compound with five to fifteen pairs of leaflets less than one inch long. The flowers are white to pale pink or violet and carried leaf axils in dense racemes one to three inches long. They give way to flat oblong seed pods that are 1 ½ to 2 inches long and contain three to eight bright red seeds one inch long and with a black spot that has led to another common name, crab’s eye. It is native to warm temperate to tropical regions of India and Asia but has been introduced in Florida as an ornamental and has become invasive in the central and southern parts of the state where it can be found especially in undisturbed pinelands and hammocks. Although the plants are used for medicinal purposes and the seeds are valuable for making jewelry, the latter can be deadly poison if chewed and ingested. USDA Hardiness Zones 9-11 END_OF_DOCUMENT_TOKEN_TO_BE_REPLACED 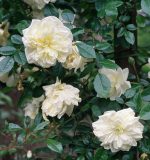 Apricot yellow buds are produced singly or in small clusters and and open to flowers that fade to cream and then white . The petal number varies considerably from semi double to fully double and the form is globular and quartered. New growth is crimson; mature leaves are small, shiny, and dark green. The stems are semi-evergreen in warm climates and bear few prickles. Plants are semi-evergreen in warm climates, disease resistant and shade tolerant, but hardy only in zone 7 and warmer. END_OF_DOCUMENT_TOKEN_TO_BE_REPLACED

Also called flinders rose, this broad leaf evergreen creeping shrub is native to arid and semi arid regions of the Mediterranean, East Africa, Madagascar, parts of Asia, Himalayas, the Pacific Islands, Indomalaya, and Australia where it grows on lean, dry, rocky soils in full sun. The plants grow  2-5′ tall and 3-8′ feet wide. The round to ovoid, thick leaves  are dark green, up up to 2″ long and have sharp hooked spines  at the base of the petioles.  The fragrant white flowers are borne on long pedicils and are 2-3″ across. They have long purple stamens and only last a single day but are produced over a long bloom time from spring to autumn. The fruits that follow are called caperberries. The condiment that we know as capers are the flower buds which are pickled or salted, but the caperberries and are also preserved and used in cooking, although they are considered less tasty. Photo Credit Wikimedia Commons
END_OF_DOCUMENT_TOKEN_TO_BE_REPLACED

Butterflies in the Garden and How to Attract Them: American Painted Lady Butterfly (Vanessa virginiensis)

The American lady butterfly is a common sight in open areas such as gardens, meadows, roadsides and vacant lots in North America. It is at home in southern US to Colombia, South American but migrates up into northern US and southern Canada in warm weather. With a wing span of 1 ¾ to 2 5/8 inches, it is orange on the topside with irregular brown to black and white markings. END_OF_DOCUMENT_TOKEN_TO_BE_REPLACED 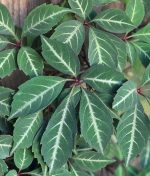 Also called Chinese Virginia creeper, this deciduous climber is native to China where it grows on moist rocks, clifts, and hillsides.  It is a member of the grape family, Vitaceae, that also includes Boston ivy.  Plants grow rapidly and may become 20-30′ long trailing along the ground or climbing  on other plants or structures by means of strongly adhesive disks located at the end of the tendrils.  The palmately compound leaves have 5-9 leaflets that are up to 5″ long and have conspicuous white veins.  They are purplish green when they emerge,  green tinged with bronze in the summer with maroon undersides, and bright orange, red and purplish in autumn.  In spring inconspicuous clusters of greenish flowers appear and later give rise to fleshy black fruits that are attractive to birds.  Although  a vigorous plant, it has a more restrained growth than its relatives Virgina creeper and Boston ivy but offers attractive foliage in both spring, summer, and fall.  It is a good choice for controlling soil erosion especially on hillsides, and  growing in containers and on walls, trellises, arbors, other garden structures and unsightly objects.  The genus name, Parthenocissus, comes from the Greek words, parthenos, meaning virgin, and kissos, meaning ivy, and refers to the first word of its English vernacular name, Virginia creeper, honoring Queen Elizabeth I who was known as the Virgin Queen. The specific epithet, henryana, honors Irish botanist and plant collector Augusting Henry (1857-1930) who discovered the species in central China in the 1880s. END_OF_DOCUMENT_TOKEN_TO_BE_REPLACED 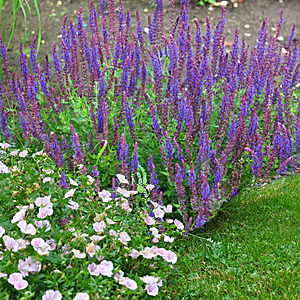 The pale pink flowers of bloody cranesbill var. striatum spread out at the feet of sage ‘Lubecca’ with its spikes of violet-blue flowers in spring. Interest is further provided by the contrast in form and texture of the flowers as well as the size of the plant. Sage ‘Lubecca’ continues to bloom into summer while bloody cranesbill var. striatum takes a siesta until fall when its foliage takes on a crimson-red color. Best growth and flowering occurs when the plants are grown in full sun with medium moist, well-drained soil. END_OF_DOCUMENT_TOKEN_TO_BE_REPLACED

This deciduous semi-shrub/climber is a hybrid between C. vitalba and C. heracleifolia var. davidiana and is a member of the buttercup family, ‘Ranunculaceae, that also includes monkshood, columbine, and hellebore.  It has strongly ribbed, slightly downy stems up to 10′ long and quickly grows along the ground, forms a 3’ tall sub-shrub, or climbs.  The pinnately compound leaves have 3-5 leaflets that are coarsely-toothed and  2-4″ long.  One to two foot long compound panicles of mildly fragrant flowers appear from  late summer into fall.  Each flower  is up to 2″ across and has 4-6 strap-shaped petal-like sepals that are yellowish-white turning creamy-white inside and lavender-white outside and at the tips.  Jouin clematis is good in a border, as a ground cover, or growing  over a wall, tree stump, or garden structure. The genus name, Clematis, is from  the Greek word klematis, the name for climbing plants in general.  The hybrid name, jouiniana, honors E. Jouin, manager of the Simon-Louis nurseries at Metz.  The cultivar name, ‘Praecox’, comes from the Latin prae- meaning before, and coquere, meaing to cook, and means ripen early, an odd choice considering that the plant blooms late relative to other Clamatis’ and plants in general. END_OF_DOCUMENT_TOKEN_TO_BE_REPLACED