How to Prune a Deciduous Tree or Shrub 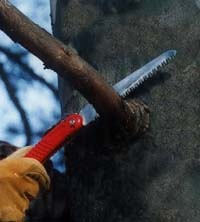 As a general rule there should be very little pruning required if you selected the right tree or shrub for the place it was planted. Unfortunately this is not always the case and pruning is needed to limit the growth of a large tree or shrub planted in a space to small for its size. Since most gardeners are not going to be pruning large mature trees the information provided here is aimed at “Do-it-yourself” pruning of young trees and shrubs. However, a section is provided that gives general information about pruning large mature trees so you have a better understanding of what’s needed when negotiating for the work with an arborist. See also: How NOT to prune a mature tree (Tree Topping). 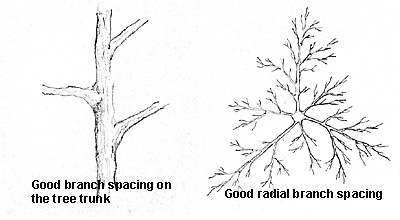 Why Prune: It is very important to prune trees and shrubs early in their life to establish a structure of branches that requires little or no pruning as the tree or shrub matures. Trees and shrubs are also pruned to remove dead, damaged or diseased branches and to remove limbs that are rubbing other branches. Since small cuts heal faster than large cuts it’s always better to prune when the plant is young, rather than wait until the branches become large and more difficult for the tree to heal over the wound. Most pruning should be done in the first five years of the plants life. Mature trees growing in urban/suburban settings may also require pruning to eliminate hazards, such as rubbing on a roof or to increase light on the ground beneath the tree. Trees and shrubs grown for fruit production are generally pruned annually to increase yield.

When to Prune: Generally, pruning deciduous trees to remove broken, dead or diseased limbs can be done any time of the year. When major pruning is done, it’s best to prune in the winter dormant season because it puts less stress on the plant. In addition, it’s easier to visualize which branches need pruning and the amount of clean-up is greatly reduced when the trees don’t have leaves. Some trees such as elm, maple and walnut will bleed profusely if cut in the winter; however this doesn’t hurt the tree and it is still the best time to do the pruning. Trees and shrubs that flower in early spring (dogwood, azalea, etc.) should be pruned immediately after flowering because the flower buds are produced the year before they bloom and will not bloom if the buds are removed from winter pruning.

How to prune a tree or shrub when it is being planted: (See KarensGardenTips: How to plant a tree or shrub) Years ago the standard method was to prune back at least one third of a plant’s canopy during transplanting so that it would be proportionate to the size of the excavated root ball. Recent research has found, however, that there are plant growth hormones, called auxins, concentrated in the branch and twig tips that will stimulate new root development if there is mechanical, disease, or insect damage to the root system. Conversely, there are plant growth regulators, called cytokinins, concentrated in the plant’s root system, that will stimulate new canopy growth if there is damage to a plant’s canopy. Removing any of the plant’s canopy, therefore,  would reduce the auxins and slow down new growth and hinder the reestablishment of the root system. Thus pruning trees and shrubs during transplanting should only be done to enhance the plant’s long-term structural branching or to remove broken or damaged branches. It is best to only purchase trees or shrubs that don’t need pruning at planting time. The potted shade tree on the right would require major pruning to give it a reasonable structure of branches for future growth. Avoid buying trees in this condition! 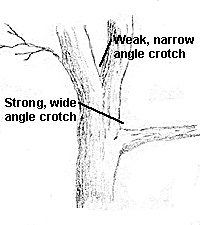 How to prune Young Trees: In general, the smaller the branch that is cut, the easier it is for a woody plant to heal over the wound quickly. Pruning while the trees and shrubs are young is very important because the small branches heal quickly and the need to remove large, poorly placed branches from plant as it matures is reduced. Two or three years after planting most trees need some pruning. It is most important to establish a good framework of branches when a tree is young so it will develop a strong structure as it matures. Watch carefully for the placement and crotch angle of the branches. Narrow angle crotches are prone to splitting because the connecting bark cells do not join together. The wider the angle, the stronger the crotch. When pruning two narrow angle branches remove the smaller or least desirable branch by cutting outside the Branch Collar. Some varieties of young trees develop vigorous upright shoots from at or just below the soil level. These should be removed by pruning at their attachment point to the tree (sometimes requiring the removal of a small amount of soil). 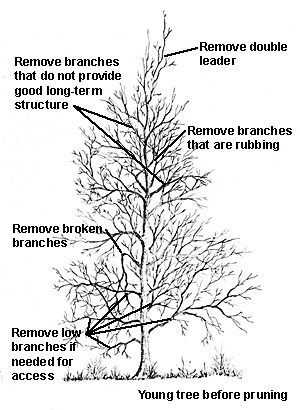 How to prune Mature Trees: Pruning large mature trees requires climbing skills and specialized tools and is generally not done by the home gardener. However, it’s still important to understand the basic principals that should be followed to ensure the longevity and aesthetics of a mature tree.

Dead, broken, weak, or diseased branches should be removed. To reduce wind resistance of a mature tree the canopy can be thinned. Thinning opens the canopy to allow more sun to penetrate the interior leaves and reach the ground below, but does not reduce the overall size of a tree. Thinning is also of value in reducing stress during drought periods. While thinning, remove branches with narrow angles of attachment. Branches should be completely removed to their tree trunk attachment or to laterals that are at least one-half the diameter of the limb being removed. Never remove more than 25 percent of the total foliage at one time. If the overall size of the tree must be reduced cut back to good lateral branches. It’s best to cut back over several years than to attempt dramatic pruning in one year. When cutting back to an intersecting lateral branch, choose a branch that forms an angle of no more than 45 degrees with the branch to be removed. Also, the branch that is cut back should have a diameter at least half that of the branch to be removed. When cutting branches over one-inch in diameter, use the three-cut pruning method (described below) to avoid tearing the bark of the trunk. If there is danger of the branch damaging other limbs below or objects on the ground, it must be properly roped and then lowered to the ground after the second cut. Do not use tree wound dressings. Historically tree wound dressings were used on pruning cuts to block out microorganisms, keep moisture out, and speed the “healing” process. Research has shown that treated wounds remain open for years longer than if no treatment had been applied. 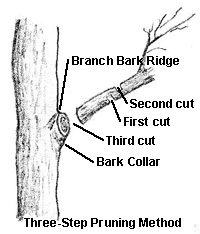 Pruning Cuts: Pruning cuts should be carefully made so that only the actual branch is removed and the stem, or tree trunk bark is not damaged. If only branch tissues are cut when pruning, the stem tissues of the tree will probably not become decayed, and the wound will seal more effectively. To find the proper place to cut a branch, look for the branch collar that grows from the stem (or tree trunk) at the bottom of the branch. On the upper side of the branch, there is usually a branch bark ridge that runs along the stem of the tree. A proper pruning cut does not damage either the branch bark ridge or the branch collar. A proper cut begins just outside the branch bark ridge and angles down away from the stem of the tree, avoiding injury to the branch collar. Branches large enough to require saws (greater than one-inch in diameter) should be supported with one hand while the cuts are made. If the branch is too large to support, use the three-step pruning method shown at the right to to removed the branch. (The first cut prevents the bark from ripping as the branch is cut; the second cut removes the branch, leaving an easily handled stub without the original branch weight; the third cut removes the stub with a clean, precise cut.) The quality of pruning cuts can be evaluated by examining pruning wounds after one growing season. A concentric ring of wound wood will form from proper pruning cuts. Flush cuts made inside the branch bark ridge and/or branch collar (to close to the stem or tree trunk), result in pronounced development of healing on the sides of the pruning wounds with very little healing on the top or bottom. Prune dead branches in much the same way as live branches. Making the correct cut is usually easy because the branch collar and the branch bark ridge can be distinguished from the dead branch because they have continued to grow. Make the pruning cut just outside of the ring of bark tissue that has formed around the dead branch, being careful not to cause unnecessary injury to the live bark. Dead branches larger than one-inch in diameter should be supported with one hand or cut with the three-step pruning method. Cutting large living branches with the three step method is more critical because of the greater likelihood of bark ripping.

Pruning Tools:Like most jobs, to do good professional tree pruning requires the correct use of the right tools. Pruning does not require a large assortment of tools; most are hand tools, but to do the job right they must be in good condition and be sharp. Pruning tools should also be clean and sanitized. Although sanitizing tools may be inconvenient, if pruning is done during the warm growing season it may prevent the spread of disease from infected to healthy trees and shrubs. When pruning is done during the growing season, it is recommended that tools be cleaned each time another tree or shrub is pruned by sanitizing pruning tools with liquid household bleach diluted 1 to 9 with water (1 part bleach, 9 parts water). Tools should be immersed in the solution, preferably for 1-2 minutes, and foreign material be wiped from all cutting surfaces. Bleach is corrosive to metal surfaces, so tools should be thoroughly cleaned with soap and water after each days use. The choice of which tool to use depends largely on the size of branches to be pruned. Generally for pruning in the home garden the only tools needed are hand shears, looping shears and a hand saw. (See also KarensGardenTips Tools for Pruning for more information.)