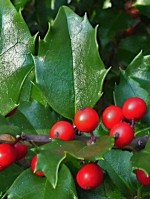 Christmas would not be the same without boughs of holly decorating the mantle, chandeliers and tables. Both English (Ilex aquifolium) and American Holly (I. opaca) are used, each with their special brand of appeal. The very shiny leaves and bright red berries of the English Holly make any arrangement sparkly, while the duller green leaves and less vivid berries of the American Holly contribute a homespun look. Then, too, the fewer prickles on the leaves of the latter are an added benefit.

The use of English holly in celebrations goes way back but there is some question as to exactly how far. The ancient Romans had a tree they called Ilex that was used to decorate their homes during the celebration of Saturnalia, a holiday occurring during our Christmas time. The Ilex they used was probably not holly but an evergreen Oak. The Christians, however, picked up the custom of using the green leafed plant as a holiday decoration and at some point in time switched to the use of holly, Ilex aquifolium, an evergreen native of southern and central Europe. By the 15th century Christians were using holly to decorate Churches at Christmas time.

Holly has a special significance at Christmas because it is thought to have grown under the footsteps of Christ and perhaps provided the wood for the cross. The thorny leaves recall the crown of thorns, the bitter taste the passion, and the red berries drops of Christ’s blood caused by the crown. Legend also suggests that the robin’s red breast is a result of the robin eating the berries of the crown of thorns.

The origin of the name holly is probably the Anglo-Saxon word holegn that is related to the Old High German word hulis perhaps connected to the word holy. The genus name Ilex was given to holly by Carl Linnaeus because he thought he leaves of holly were similar to those of the hom, or holly, oak (Quercus ilex). The species name of English Holly, I. aquifolia, refers to the fact that the leaves are pointed, while the species name for American Holly, I. opaca, reflects the non-gloosy nature of the leaves. These hollies, like others of the genus, have male and female parts on different plants so only the female plant bears berries. No problem, however, because one male can pollinate many females.