Whether you like gardens or monsters you will be captivated by parco dei mostri where huge stone creatures loom ominously as though they are ready to make you into mincemeat. No matter what I say, no matter what details I give you about this place, you will not be prepared for what awaits you. When you enter you are not just visiting a garden of stone monsters, you are entering a world you know little about, filled with mystery and symbolism

Located north of Rome, about 8 miles east of Bagnaia the home of Villa Lante, parco dei mostri was built by Pier Francesco Orsini, known as Vicino Orsini, in the mid 16th century in honor of his wife, Giulia Farnese. Guila had recently died and Orsini, a condottiero or mercenary solider, hired the architect Pierro Ligoiro, who later worked on St. Peter’s and Villa d’Este in Tivoli, to design the gardens. The gardens were designed in the Mannerist style and were intended to astonish, enchant, and unnerve rather than delight. The bizarre is the rule rather than the exception. The garden was abandon in 1571 when Orsini died and it lay in ruins for centuries beneath vines and other vegetation until 1954 when Giovannig Bettini bought, restored, and opened it to the public. Get ready for a real adventure!

As soon as you go through the entrance gate below the Orsini crest you will know that this garden is special.  Two sphinxes greet you with words that can be translated “He who does not visit this place with raised eyebrows and tight lips will fail to admire the wonders of the world.” Interestingly, the Roman Emperor Augustus originally took the sphinx for his seal (but later changed it). 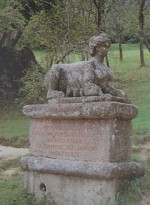 A little further inside the park figures of some ancient gods may be seen including Saturn, Faun, two headed Janus, and three headed Hecate, goddess of witches, magic, and ghosts amount other things.

The colossal head of Proteus-Glaucus with its wave like eyebrows, cheeks, and lips greets you with a howl. On monster’s head sits a globe with a castle on top; the castle is probably a model of the Orsini castle and set there to proclaim the power of this branch of the Orsini family. Proteus was a sea god, the son of and herdsman of the god Neptune, who could foretell the future but only to one who could capture him. He is also Glaucus, a mortal fisherman who became an immortal sea-god by eating a special herb. He was associated with Jason and the Argonauts and is said to have built the Argo. He metamorphosed after a jump into the sea and was then described as a blue-skinned merman, with copper-green hair, a serpentine fish-tail in place of legs, and encrusted with shells, seaweed and rock. 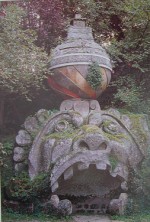 On a different path beside a little waterfall you will find two giants engaged in combat. They may represent the battle between good and evil, between the giants, or between Hercules and the fire breathing, human flesh eating Cacus. Hercules went after Cacus for stealing the cattle that Hercules had stolen from Geryon. According the Roman poet Virgil, Hercules killed Cacus by squeezing him so tightly that his eyes popped out. An inscription advises us, ‘ If Rhodes was the city of the 100 colossus’ this statue (and the whole park) could easily be yours.’ 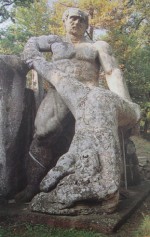 A large tortoise with a globe and statue of winged victory on its back stands on a large rock that resembles the prow of a boat. The tortoise appears to be looking at the large whale that lies at the bottom of a ravine.

Nearby, the winged horse Pegasus stands on his hind legs ready to take off to the heavens above. Pegasus was the offspring of Medusa and the mount of Bellerophon when he slay the Chimera. When Bellerophon tried to ride Pegasus to Oympus, Zeus sent a gadfly to bite Pegasus and cause Bellerphon to fall. Pegasus was the emblem of the Farnese and his place in the garden may be interpreted as a tribute to Alessandro Farnese, Italian cardinal and diplomat and great collector and patron of the arts.

The Nymphs’s Shrine features the three Graces, daughters of Zeus, who represent such virtues as charm, beauty and creativity. They were the personification of joy and everything that contributed to happiness. Their names were Thalia, the flowering; Euphrosyne, joy; and Aglaia, the radiant. Note the tritons at the foot of the shrine, a reminder that Romulus and Remus, founders of Rome, were abandon beside the Tiber.

A niche in the rock is home to a statue of Venus standing on a shell. She is not the graceful and beautiful Venus we are accustomed to seeing in statues of Venus and perhaps has more in common with the Etruscan women that were the ancient inhabitants of the area. Mythology tells us that Venus was borne on a sea shell from sea foam as a full grown woman; the ancients associated her with vegetation and gardens and believed that she was the mother of the Roman people 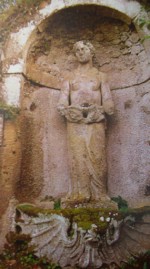 A theater was a common feature of a Renaissance garden and Bomarzo has one too.

The Leaning House might make you think that someone was drunk when they designed and built it. But no, it is build on a sloping rock and was probably meant to amaze guests and make a visit to the garden more memorable. A carving near the house suggests that it was ostensible intended for rest; ‘By resting, a mind may become wiser.’ I doubt anyone would find the house restful. 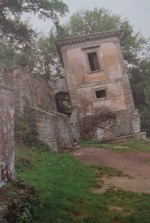 Close by, Neptune or perhaps Father Tiber, reclines in a pool with a little dolphin under one hand and a large dolphin at his side with mouth wide open. Classical mythology associated dolphins with the god of the sea and the cult of Apollo. They considered dolphins helpful to humankind and often used them as artistic motifs.

The Sleeping Nymph is either sleeping or dying and has the proportions of a giant, but this is Bomarzo and nothing is out of the question. Ligorio, the designer of the garden, probably intended visitors to think of Ariadne or a Greek nymph associated with purity. Ariadne was the daughter of King Minos of Crete, who helped Theseus kill the Minotaur, was later deserted by Theseus on the island of Naxus, and was rescued by Bacchus.

Bearing a basket of bread on her head, Ceres, sits midst tritons, young boys, and large vases, perhaps in a grouping inspired by a painting by Raphael. Ceres was the goddess of corn and patron goddess of Rome. 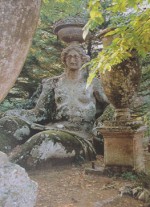 The elephant carrying a tower on his back and a dead soldier with his trunk symbolized eternity, suggested fidelity, gratitude, and wisdom, and recalled the battles of ancient warriors using elephants such as Antiochus who defeated the Gauls in the 3rd century BC, and the devastation by Hannibal during the Second Punic War. In addition, Scipio Africanus the Roman general who defeated Hannibal, had one of the first pleasure gardens of his times. 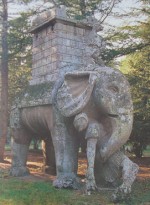 The scaly Dragon, with his curled lips and butterfly-like wings, fights a dog, lion, and wolf, symbols of spring, summer and winter, in the present, future, and past. The dragon seems to be guarding the purity of the springs and bravely stands up to his attackers. 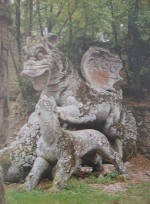 A huge head has a mouth so large that a table and stone bench are located inside. The appearance of the face changes with the season as vegetation grows and dies.

A giant vase recalls the journey of Bacchus into hell. On its base is an image of Medusa who had snakes for hair and was known to turn people into stone if they looked at her. 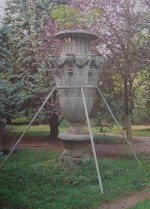 Cerberus, the three headed guardian of Hades, looks in all directions with two mouths closed and the third ready to bite. He stands his watch to keep dead in Hades from leaving but freely allows the living to pass to the underworld. 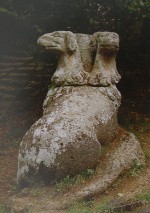 The goddess Persephone greets the visitor with open arms. According to mythology, she was married Hades, god of the underworld, and had to spend 6 months on land and 6 months in Hades. Her mother was Ceres, goddess of grain, whom we saw earlier in the garden. Two bears stand in front of Persephone, one bearing a shield, the other the Roman rose.

The monstrous Echidna was half woman, half snake and ate men raw. She was the mother of such notable monsters as Cerberus, the Chimaera, and the Nemean lion. At Bomarzo she is accompanied by two lions, found on the coat of arms of Viterbo, the capital of the province in which Bomarzo is located. Rounding out the group is another monster with a dolphin tail, one of three Furies who were known as avengers of crime.

It is interesting that so much mythology is included in this garden. The Renaissance thinkers were in very impressed by ancient Roman civilization and embraced its literature and art so it is not surprising to see mythological creatures in their gardens. Ville D’Este in Tivoli, Italy, another outstanding garden filled with mythological themes, is another Renaissance garden worth a visit.