Garden Pests: Pocket Gophers and How to Control Them 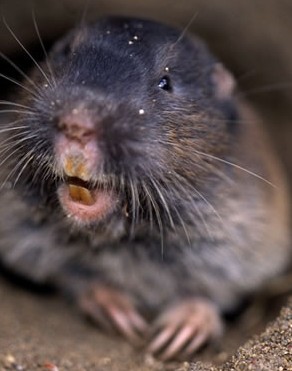 If you have ever had gophers in your garden you know what a terrible menace they can be. They dig extensive tunnels, eating roots as they go, even pulling plants down into the tunnel to devour them. Eliminate the pesky rodent and another one is likely to move into the vacant territory so they are very difficult to eliminate. Sometimes moles or ground squirrels are mistaken for gophers but true pocket gophers have fur-lined cheek pockets that open to the outside and are used for carrying food and nesting materials. In the United States there are thirteen species in three genera that differ in the size of their forefeet, claws, and front surfaces of their incisors. Gophers are more common west of the Mississippi River where they can be found in low coastal areas or at altitudes up to 12,000 feet. Although they can tolerate a wide variety of soils they prefer a friable, light-textured soil with good drainage where garden plants can thrive and offer them tasty roots and shoots.

Gophers are well adapted to a borrowing existence with short thick necks, small flattened heads, long strong claws, large yellow incisor teeth, and lips that close behind the incisors. Since they live in the dark tunnels they have small eyes and ears but long sensitive whiskers and tails equipped with sensory cells. They are five to eighteen inches long, and have an abundance of soft fine fur in shades of dark brown to off white. They live alone except for a brief period when they mate and have off-spring. In spring, eighteen days after mating, a litter of one to ten young are borne with an average of three to four. The male may stick around the newborns a short time before going off again, and the young leave the mother as early as six weeks old.

You are most likely to first notice gophers by the crescent or horseshoe shaped mounds they create when they dig their tunnels. Gophers work day and night all year around usually making one main tunnel with many side ones that are closed off after feeding in them. One gopher can dig up to 600 feet of tunnel. The tunnels can go down in the ground as deep as ten feet but are usually in the top two feet of soil. Because each gopher needs about 700 square yards for his tunnel system, a single acre of land can accommodate sixteen to twenty gophers. Gophers usually stay very close to the opening of their main tunnel and once they stake out their territory they will defend it from invasion with a threatening stance, panting, gasping, and by thrusting their claw-armed front paws forward.

Gophers are herbivores and eat many different kinds of roots. They find alfalfa roots especially delectable but also eat thick roots like carrots and bulbs like tulips. They will also eat young shoots and plants around the entrance to their main tunnel. In winter where there is snow cover they may gnaw on the bark of trees and shrubs.

In spite of their deleterious effect on a garden gophers are ecologically important especially in regard to soil. Their burrowing activities increase soil fertility by adding organic matter in the form of plant and fecal material. In addition, soil aeration and water infiltration are increased by burrowing and compaction is decreased. When considering ways to control or eliminate with gophers these benefits should be weighted in.

There are many suggestions available for dealing with gophers most of which are ineffective or impractical for the home gardener. Here are some of the successful methods to minimize gopher damage.

1. One of the most effective methods is also the most work; building gopher proof raised beds with covers for the plants your want to grow that are threatened by gophers. This involves using a gopher-proof material like hardware cloth.

2. Place the desirable plants in pots or bottomless buckets and sink the pots in the garden once they are established. Leave a two inch lip above ground to discourage the gophers. Be sure to water and fertilize frequently.

3. Repeated flooding the tunnels of the gophers may encourage them to seek another area. Gophers can swim so will leave when the tunnels are flooded and then return. The soil of the tunnel, however, can be saturated sufficiently that the gopher will decide to move elsewhere where the digging is easier.

4. Apply predator scents to the hole. Ferrets, for example, are predators of gophers and their scent may convince the gopher to move on. A product called Ferret Scent can be purchased. Easier, but not as effective, is the application of used kitty litter or dog hair to the gopher hole.

5. Encourage predators such as ferrets, bull snakes, skunks, badgers, and owls such as barn owls or great horned owl. This is not only difficult is takes a long time and may not ever be effective as the predators go wander far from their home base in search of easily captured prey.

6. Plant a sold wall of Eurphorbia lathyrus sold under the names of Nature’s Farewell Seed and Gopher Patrol. The plants are about four feet high and secrete a substance that will inhibit the gophers if you are lucky. This is not a guaranteed method of control.

7. Place an ultrasonic noise emitter sold under such names as Go’pher. Although you will not be able to hear the noise the gophers do but they tend to get used to it and go on as usual.

8. Place empty soda bottles in gopher holes or half bury them in the area around the hole with opening up. Breezes blowing over the opening produced sounds that scare the gopher.

9. Trapping with live traps is not practical because it involves releasing the animals elsewhere and no one wants them. In some states releasing gophers in new territory is illegal.

10. If you are OK with killing the gophers you can use poison or lethal traps. Trapping is the most common method of dealing eliminating gophers.

Next post: Book Review: Buy the Right Wine Every Time