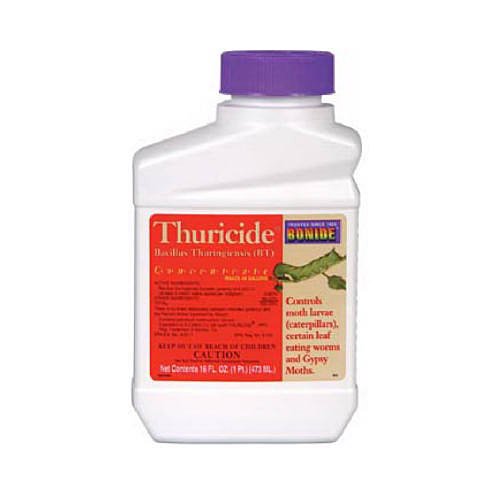 One of the tools available to the organic farmer is Bacillus thuringiensis, commonly known as Bt.  It is a naturally occurring bacterium that produces a protein that is toxic to certain insect pests. When ingested the protein paralyzes the digestive system of the insect so the insect stops eating and starves to death in a few days.  Although Bt was discovered in 1911 it has only been commercially available since the 1950s and is considered environmentally friendly.  In recent years scientists have been using Bt for genetic engineering to produce crops that are resistance to chronic insect problems.

The characteristic that makes Bt so environmentally friendly is its specificity.  Each strain of Bt targets specific pests.  For example, the most commonly used strain, kurstaki, works only against leaf and needle feeding caterpillars.  Another strain, israelensis, is effective against mosquitoes, black flies and fungus gnats. Other strains control over insects such as gypsy moths, tomato hornmworm, cabbage loopers, boll weevils, and nematodes.  None of these Bt strains are believed to hurt beneficial insects, humans or wildlife.

There are several drawbacks in the use of Bt for insect control.  The first has to do with its specificity; about 150 kinds of insect are susceptible to some strain of Bt but many are not.  Second, Bt is degraded by sunlight and only remains effective for 24 hours to one week.  In addition, Bt is only effective if ingested by insect larvae, smaller larvae being more susceptible than larger ones.  Timing has to be precise and several applications may be necessary during the hatching period. Finally, the shelf life of Bt is generally shorter than that of other insecticides, declining when 2-3 years old.  Liquid formulations have a shorter shelf life than dry ones.

Bt offers a safe way to control certain insect pests.  When buying a Bt product make sure that it is specific for the pest you need to eliminate, otherwise it will be ineffective.  Follow the directions carefully so as to maximize effectiveness and remember that timing is very important for success.