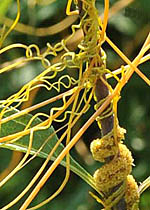 Dodder is a unique weed because of its parasitic nature. It twines itself around another plant and attaches itself by means of haustoria, root-like structures that penetrate the host plant and enable the dodder to obtain all its nutrients. Some dodders can parasitize relatively few kinds of host plants while others parasitize a large number including vegetables, grains, and weeds. Because dodder depends on other plants for its food it is not particular in regard to soil type although some species prefer wet places like marshes and ponds. Dodder is a native of North American and found in most of the United States. Dodder species are difficult to distinguish but Cuscuta indecora is the most widespread and has the largest numbers of host plants.

Description: Dodder is an annual vine and the seedlings begin to emerge in mid spring. They appear as slender, fleshy, yellow or orange threads and must find a host within five to ten days or die. When they find a host plant they begin to twine and attach themselves growing very quickly, up to 3 inches per day to a maximum length of three feet. The leaves are either absent or reduced to triangular scales. Flowers, on the other hand are abundant especially in late summer and fall. They are creamy white, bell-shaped, 1/8 inch long and usually borne in cluster, sometimes singly. Each flower produces 2-3 seeds with rough coats that allow them to remain viable in the soil for several years. A single plant can produce several thousand seeds. There is no root system because of the parasitic nature of the plant.

Control: Control of dodder depends primarily on removing the seedlings from the soil as soon as they appear. As soon as any dodder stems are seen on a plant they should be removed taking care to remove 1/8th to 1/4th inch of host tissue if possible since the dodder can regenerate from haustoria left in the host. If the infestation is large, mowing or burning the whole field may be the best way to eliminate the weed quickly but all infected stems of the host plant must be killed or the dodder will regenerate from the haustoria. Growing plants that are not parasitized by dodder can greatly aid in control. Preemergent herbicides such as trifluralin can reduce the number of new seedlings if applied before seed germination but post emergent herbicides have limited use because of the intimate relationship between the host plant and the dodder that leads to harm of the host plant as well as the dodder.