Genus: Alternanthera For the Garden 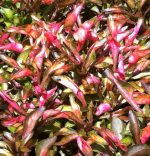 Alternanthera is a genus of annual or perennial herbs or subshrubs in the amaranth family, Amaranthaceae, that also includes beets, spinach, celosia, and gomphrena. The genus consists of up to 200 species and includes garden plants as well as aquatic weeds such as alligator weed, A. philoxeroides.  Most of the species are native to the tropics and subtropics in the Americas with some in Asia, Africa, and Australia. The plants may be erect, prostrate, decumbent, or floating and have opposite leaves with entire margins.  The flowers are inconspicuous and are borne in axillary or terminal spikes or globose heads and have lack petals.  The garden Alternanthera are grown for their foliage and were especially popular in Victorian times when the formal style of planting demanded plants that could be cut to within 6″ of the ground and shaped.  Plants can be used in containers, as houseplants, and in the border.  They develop best color in full sun, need consistent moisture, and are perennial in USDA  Hardiness Zones 10-11.

Native to the West Indies and Brazil, plants are sprawling to upright and grow 1-3′ tall.   They have linear to lanceolate leaves 3-4″ long and with pointed tips.  The leaves of the species  have dark green tops and paler undersides while those of the popular cultivars are purple to burgundy.  From fall into winter small spikes of  inconspicuous white to greenish apetalous flowers are produced in the leaf axils. Good in the garden and containers.

This evergreen herbaceous tender perennial is native to Mexico and South America and grows  6-12″ tall with erect to procumbent stems.  The obvate leaves taper at the base, are up to 1′ long, and are usually green blotched with  various colors including brown, copper, orange, purple, red, or yellow.  Globe-like clusters of  small, apetalous, white to cream colored flowers appear in axils of the leaves from fall into winter. Good choice for edgings and formal designs.

Red calico plant is an evergreen tender perennial  native to Brazil. The plants grow 8-20″ tall and have erect branched stems carrying  variegated foliage. The oval to spatulate leaves are green sometimes tinged with red or yellow and are carried on short petioles.  In fall 2-5 white to cream colored  flowers appear in terminal or axillary globose clusters less than 1/4″ in diameter.  This species is very similar to A. ficoides and is sometimes considered a variety of that species. Good for formal designs and containers.