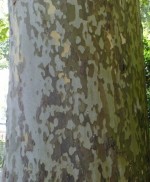 A large deciduous tree tolerant of pollution, compaction, and drought, London Plane tree was first popular as a street tree in the cities of Europe and later spread to cities in the United States. It is probably a 17th century hybrid of American sycamore (Platanus occidentalis) and Oriental planetree (Platanus orientalis) but may be more resistant to anthracnose than the former. The large lobed medium to dark green leaves resembling those of a sugar maple turn uninteresting brownish yellow in the fall. Inconspicuous male and female flowers are produced on the same tree in spring. The female flowers are followed by pendulous one inch furry balls produced in 2’s and 3’s and made up of numerous achenes. Changing in color from green to brown, they persist into winter and can create a litter problem. The gray-green exterior bark of the tree exfoliates revealing the creamy inner bark, a most attractive feature but also causing a litter problem. Because London plane tree is a very large tree it is grown to advantage where there is plenty of space so it can spread out. It can be pollarded and pleached. Several cultivars with varying disease resistance are available.

Bloom: Inconspicous male and female flowers produced in spring on the same tree; fruits are achenes produced in pendulous furry balls in 2’s and 3’s