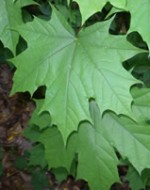 Some of us have fond memories of “helicopters” swirling down from maple trees, breaking them open and sticking them on our nose. If you share this memory you may have been in the company of a Norway maple. There are many cultivated maples but Norway maple is one of the most widely planted ones in urban areas of the United States because of it is easy to grow, and tolerant to drought, heat, and air pollution. This deciduous tree native to Europe and western Asia is medium sized and has a dense, symmetrical crown at maturity. The five-lobed leaves are dark green  until fall when they turn an unexciting yellow. Erect corymbs of small flowers appear in spring and are very attractive because of their yellow-green color and frilly fine texture. Not everyone, however, would fine them worth noting but if you like to do spring flower arrangements they can be used to great advantage. The fruits, known as samaras, are winged, and are green before turning tan in the fall. Unfortunately, the dense canopy and shallow, vigorous root system of Norway maple can interfere with growing turf and most other plants around the tree base. In addition, the roots create havoc on driveways and sidewalks. In some places like New Hampshire and Massachusetts where Norway maple has naturalized it has become invasive so has been banned. There are over twenty cultivars varying in leaf color and form.

Soil: Tolerant of many soil types if well drained.

Pests and Diseases: Generally pest and disease free but susceptible to verticillium wilt.

’Crimson King’ (maroon-red leaves throughout the season; slower growing than others)

Next post: Weeds and Their Control: Field Bindweed (Convolvulus arvensis)