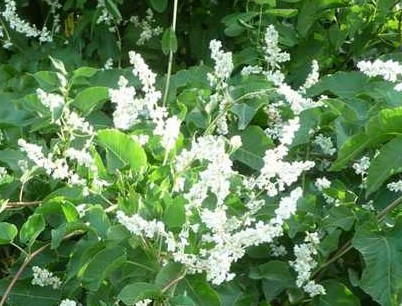 Russian vine is a rapidly growing deciduous woody vine from Asia that is often used to cover large objects such as pergolas and walls as well as eyesores such as rock piles or tree stumps. It climbs by twining but needs a support structure unless it is grown as a ground cover. . The heart-shaped leaves are tinged with red when they first appear but turn dark green as they mature. In mid- to late summer and during the fall tiny fragrant flowers appear in large panicles. The nodding, funnel-shaped flowers have five lobes and are whitish tinged with pink. The common name “mile-a-minute-vine” gives a very good idea of how rapidly this plant grows. They spread by rhizomes and are less likely to be invasive if grown in lean soil.

Bloom: Small, fragrant, white flowers tinged with pink are produced in panicles from mid- to late summer into fall

Soil: Fertile, moist, well-drained but tolerant of a variety of soils

Care: Prune to keep within bounds; can be rejuvenated by cutting back to 1-3′ feel in late winter.

Pests and Diseases: None of significance but susceptible to Japanese beetles

Next post: Book Review: The Art of Simple Food II