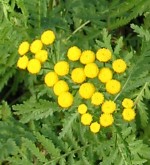 Tansy is a perennial herb and a member of the aster family, Asteraceae, that also includes daisy, yarrow, and lettuce. It is native to Europe and Asia but was introduced into North America by colonists before 1631 for medicinal and horticultural purposes and now occurs throughout much of the US in recently disturbed sites such as roadsides, railroad right of ways, hedgerows, ditches, vacant lots, old fields, pastures, and river banks. Plants grows from an extensive spreading root system composed of fibrous roots and rhizomes.  They grows one to four feet tall, is branched at the top, and has  a thick upright stem that may be hairy or hairless.  The green leaves are fern-like, six to eight inches long, and give off a pungent odor when crushed.  They are pinnately compound and leaflets  have toothed margins.  The button-like flower heads  are 1/2 inch wide and appear in summer in terminal flat-topped clusters.  Each flower head consists of yellow disc flowers with ray flowers absent or reduced. The fruit is a single seeded achene and a single plant can produce up to 50,000 that remain viable in the soil for just one season.  The genus name Tanacetum was derived from the Greek word athanasia meaning immortality. The specific epithet, vulgare, comes from the Latin word vulgaris, meaning common.

Bloom: Yellow flowerheads , 1/3-1/2” across, are produced in loose clusters during late summer and fall.

Soil: Average; does well in a variety of soils; the richer the soil, the more lush the growth.

Care: Keep a watchful eye on its spread.

Pests and Diseases: Tansy beetle has developed resistance to the plant and lives almost entirely on it.

Outstanding Selections: Small cultivars are available that are good in a rock garden; they are not as easy to grow as the species and need good drainage, but they are also not as rambunctious.