Birds in the Garden: Plants that Attract the Nuthatch Family (Sittidae) 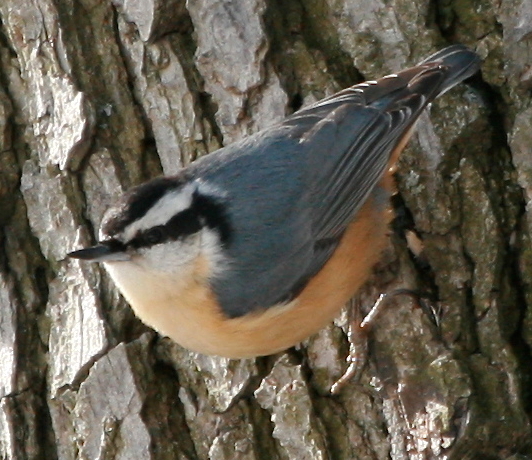 The nuthatch family consists of a single genus, Sitta, four of which are found in the United States. Two nuthatches, the white-breasted and red-breasted, are found in the forested areas of all continental US. All but the red-breasted nuthatch are non-migratory. Nuthatches are plump birds with large heads, short legs, stubby tail, and a long, pointed powerful beak adapted for prying insects out of deep bark crevices and opening nuts and seeds. Their backs are usually gray or blue on top, their breasts light colored, and their head marked by a dark cap and a long black eye stripe with contrasting white “eyebrow” above it. Nuthatches’ diet consists of insects, nuts, and seeds. They seek insects such as beetles, moths, and scale that live on or in tree bark by running down the trunks and branches, often head first.

Both coniferous and deciduous trees attract nutchatches as long as they are fairly large, with a trunk of at least six inches in diameter.

These evergreen conifers have short needles, dense branches, and numerous cones as they mature. Both the seeds from the cones and the insects from the bark attract nuthatches. Kinglets and bustits eat insects from the foliage and many birds enjoy the trees as cover or for roosting.

Size: To 100′ H
Site: Full sun and medium moist, well-drained soil
Hardiness: Zones 3-8 depending on the species and cultivar

This evergreen conifer has short soft needles, dense branches, and small cones. It grows quickly to about 20′ and then grows more slowly to maturity at about 100′. It provides nuthatches with seeds from its cones and insects from its bark and branches. Kinglets and bushtits eat the insects from the hemlock foliage, and several birds including juncos and towhees enjoy the cover beneath the tree.

Many of these large deciduous fast growing trees are available so try to find one that is native. Some maples serve as host plants for caterpillars of moths and butterflies so will be especially appreciated by nuthatches. Insects in the bark will also please the nuthatches and insects around the flowers and on the foliage will attract a large number of birds including warblers, orioles, tangers, vireos, woodpeckers, chickadees, titmice, jays, and vireos. Maples tend to have beautiful fall coloration but a dense canopy that makes growing other plants under it difficult.

Although slow growing, these large deciduous trees provide acorns loved by nuthatches. The insects on the foliage and around the flowers are attractive to chickadees and titmice as well as other birds such as tanagers, orioles, vireos, warblers, and flycatchers. If you have a choice, choose a white oak for its very tasty acorns.

The single large-headed sunflower in shades of gold and red are attractive in the garden and sure to attract nutchatches as well as many other birds such as chickadees and corvids looking for seeds. Wrens, chickadees, and warblers are attracted to the insects around the flowers and hummingbirds may come for the nectar. Sunflowers are easily grown for seed.