Bluebirds in the Garden

One of the great joys of my garden is the family of Eastern bluebirds that come to my birdhouse each spring. Actually, the birdhouse is a bluebird-nesting house, that is to say that it was designed with specific dimensions and entrance home for bluebirds. That does not mean that other birds will not try to use it, and one of the challenges of having a bluebird nesting house is keeping out other birds, especially sparrows.

My bluebird-nesting house is rather simple and rustic looking so I placed in an area of my garden that would be enhanced by a casual rather than formal look. I also had to take into consideration the fact that bluebirds are insectivorous during the nesting season and favor a nesting site that is in a grassy area where they can see the ground dwelling insects they like to eat. Of course, they like a few trees around for perching so I picked a spot in my garden that met these criteria and mounted it on a post about 5 feet from the ground and facing away from the prevailing winds. Bluebirds nest in March and April, earlier in some parts of the South where they reside year round, so I installed my birdhouse in February. I did not have to wait long before a handsome male checked it out and with his lady friend moved in and built a cup shaped nest of grass and pine needles. Grass is the most common material for bluebirds but I use a lot of pine straw as mulch so my pair used what was handy. At this point my male bluebird became quite territorial and drove many unidentifiable birds of about his size away from the house. This is typical behavior for a male bluebird and so if you want more than one bluebird house you should install them at least 125 yards away (mountain bluebirds need more room, Western bluebirds need less). Over the course of the next few weeks, eggs were laid and hatched, and baby birds emerged. The couple went away for a while but returned (or so I think) to nest again later that summer. 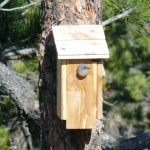 Having the nesting house in the garden adds a special charm and when those birds have their family in the house it provides several weeks of entertainment. If you think you might have a good environment for bluebirds and a spot for a house go to the website of the North American Bluebird Society, http://www.nabluebirdsociety.org for all the details you will need.