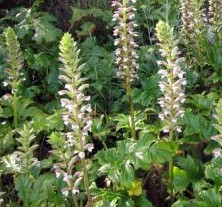 Acanthus (uh KAN thuhs) Latin form from Greek akanthos, meaning thorn or prickle
Acanthus is used as the name for the family Acanthaceae composed mostly of perennial herbs and shrubs mostly from tropical areas. The genus Acanthus contains two particularly ornamental species, A. mollis (bear’s breeches), and A. spinosus (spiny bear’s breeches). Both have showy, spiny, leaf-like bract subtending the flowers that are produced on tall erect spikes. Although spiny leaves are often a characteristic of the genus, those of A. mollis lack spines.

The real claim to fame of the genus is the use of its deeply cut showy leaves as an inspiration for the capital of Corinthian and Composite columns in the ancient world first noted before 450 B.C. Corinthium columns were very popular in ancient Rome and continued to be used in medieval and Renaissance times when the acanthus symbolized heaven.

A. mollis is popular around the Mediterranean, can be well grown in southern California but languishes in humidity and can not survive winters colder than zone 8. A. spinosus tolerates warm, humid summers better than A. mollis and is hardy to zone 7. If Acanthus likes its site it will colonize by invasive roots and be difficult to eliminate.