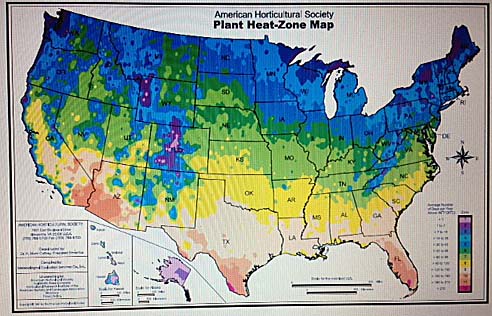 All of us who garden in the southern part of the country have probably noticed that high temperatures can be as much of a problem as low temperatures especially in times of drought and/or high humidity.  Lucky for us the American Horticultural Society came up with the AHS Plant Heat-Zone Map that is similar to the USDA Hardiness Map.  The map shows 12 zones based on the average number of days each year that a region has temperatures over 86 degrees, a critical temperature for plant growth.  At this temperature plants begin to deteriorate even though you might not notice any change at the time.  Signs of heat damage include dropping leaves, withered flower buds, white or light green areas in the leaves, and stunted growth.  Zone 1 of the Heat-Zone Map has less than one heat-day (temperatures over 86o F) while Zone 12 has more than 120 heat days.  Many factors influence the effect of heat on the plants such as water, light, soil pH, humidity, and air movement.

More and more plants are being labeled with both their hardiness zone and heat zone ranges.  Look at the labels or catalog descriptions and you will often see two pairs of numbers.  For example, a recent garden magazine article describing Bergenia had the following information: “Cold: USDA zones 4-9; Heat: AHS zones 9-1”.  They are telling us that Bergenia can grow well where the lowest average temperatures are -30o F., and the number of days over 86o F. are between 120 and 150.  My North Carolina garden is in heat zone 7 so I would expect to be able to grow Bergenia (but have never been successful for other reasons).