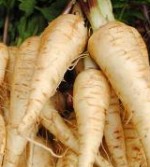 My paternal grandmother, Helen S Wright, included three recipes for parsnip wine in her book, Old Time Recipes for Home Made Wines. Two of the three recipes begin with ample amounts of parsnips while the third only requires one pound. The two recipes using ample amounts of parsnips are essentially the same but the one for just a pound of parsnips requires hops and more sugar. A comparison with modern parsnip wine recipes reveals that modern wine makers use many more ingredients and report that the result is a sweet white wine that keeps fairly well.

Here is Grandmother’s number one recipe for parsnip wine in her own words.

To six pounds of parsnips, cut in slices, add two gallons of water; boil them till they become quite soft. Squeeze the water out of them, run it through a sieve, and add to every gallon three pounds of loaf sugar. Boil the whole three-quarters of an hour, and when it is nearly cold, add a little yeast. Let it stand ten days in a tub, stirring it every day from the bottom, then put it in a cask for twelve months; as it works over, fill it up every day.