The Middle Ages is generally considered to be the time from the fifth century to the fifteen century. During this time feudalism was strong and the power and influence of the Church rose to take the place of the central government that had collapsed as waves of migrating peoples swept over Europe. The people lived on manors, in small town, and in religious communities such as monasteries. Trade declined, warfare was common, and famine was a constant threat. Life was difficult for most people. 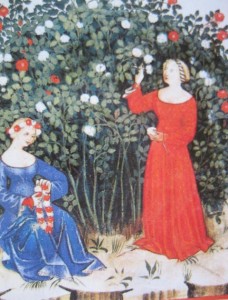 Warfare was a way of life in the Middle Ages and safety was a major issue. Walls became important and walled gardens became popular. In this illuminated manuscript we see a group of people enjoying themselves in a walled garden with roses. 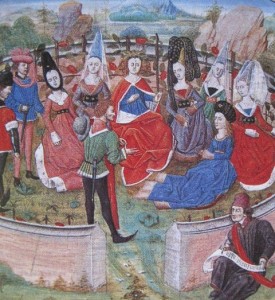 A detail from another manuscript shows a rose bush growing on a trellis with in a walled garden. 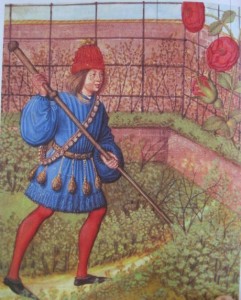 Even Christ is depicted in a walled rose garden. The red rose became associated with the blood Christ shed on the cross and later the blood of martyrs, thus becoming the symbol of God’s love. 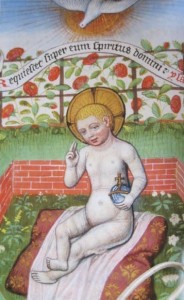 The Virgin Mary was also associated with roses and was often referred to as the ‘rose without thorns’. This is a reference to the belief that the roses in the Garden of Eden were thornless until the fall and that Mary was the result of immaculate conception; Mary’s mother Anne was smelling a rose when she conceived Mary. Mary’s virginity was compared with the white rose and her charity to the red rose.  Here Mary sits in front of a rose bush on a trellis. 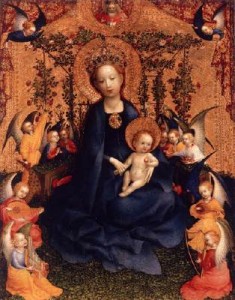 Mary is shown in a rose bud in the Jesse Tree of this stained glass window. Jesse Trees show the lineage of Christ from Jesse and were popular in medieval manuscripts and church windows. 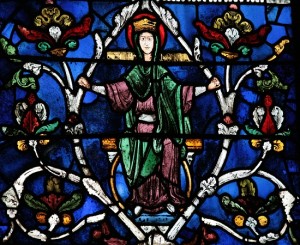 In the twelfth century Gothic cathedral usually included a rose window dedicated to the Virgin. 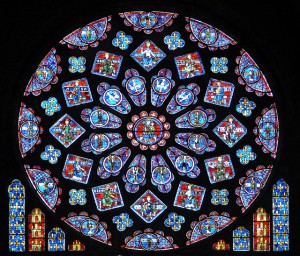 The rosary beads for counting prayers were introduced by Saint Dominic. in the thirteenth century.   The name rosary is from the Latin word rosarium, referring to a crown or garland of roses.

On the other hand, in the literature of courtly love the rose was a symbol of the beloved lady who is sought by the hero but is virtually unattainable. 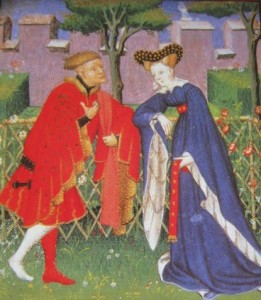