We have had the gamut of weather this week from high heat and humidity to the coldest day on record for August first. Torrential showers gave the plants a good drink or perhaps drowning is a more accurate term because the downpours were followed by a couple of days of clouds and cool temperatures so nothing dried out. Root rot has been a problem for some of the plants including phlox, begonias, petunias and some of the vinca. The cloudy days have not deterred the bees and the vegetable garden is humming and producing a surprising number of squash and tomatoes.

The formal garden looks peaceful and serene in the cloudy haze. 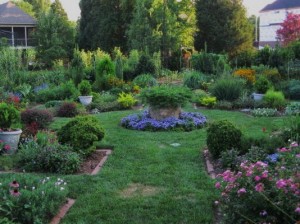 But notice the intrusion into our landscape; the huge house that is being built in the lot at the end of our property, beyond the vegetable garden. For other reasons we planted some very fast growing trees there last year and hopefully they will block the view in a few years. At least we have the huge and gorgeous crape myrtle tree blocking some of the view. It adds a lot of color! The main show in the formal garden are the two large clumps of black eyed Susan. Their gold color is bright enough to be enjoyed from the kitchen window many yards away. 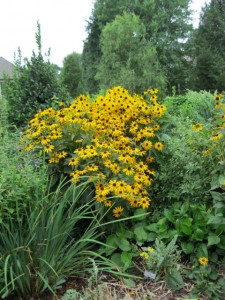 Some hardy ageraturm (Eupatorium coelestinum) is snuggling up to the black eyed Susan. This plant came piggy back on some phlox from my Annapolis garden and has managed to spread itself around half of the garden so far. It gets very floppy and this year I tried to cut it all back so that it would be stockier and bloom later but I missed this one and it is tall, floppy, and blooming before the others in the area. 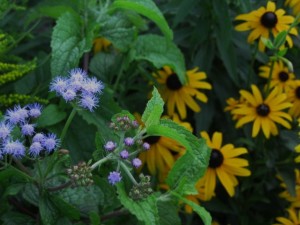 A clump of “Happy Returns” daylily is reblooming near the black eyed Susan with its constant companion, a volunteer ladybells (Adenophora  lilifolia) from the garden in Annapolis. I have dug the ladybells out many times, did not deliberately bring it to North Carolina, but am resigned to living with it forever. 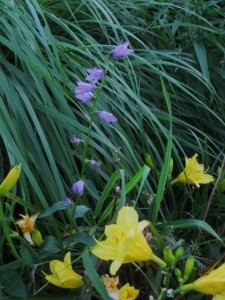 Another volunteer in the formal garden is this balloon flower, (Platycodon). I never bought a balloon flower that looked like this but think it is quite lovely and am glad to have it. Perhaps the mulch brought the seeds into my garden. I did a huge cutback to the basal leaves on this scabiosa and now it has returned in a more manageable size making a see through screen to the lamb’s ear and  a few balloon flowers. 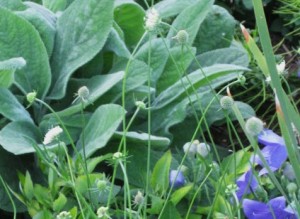 The goldenrod has developed full heads and mimics the shape of the celosia at its feet. 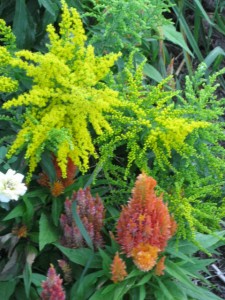 I have a love hate relationship with houttuynia ‘Chameleon”. I love it in the spring when it blooms with sundrops. The leaves are dark green and have red and yellow variegation that looks terrific with the yellow sundrops. The sundrops are gone but the red cockscomb has grown and  is now echoing the red in the houttuynia. In between the sundrops and celosia I pull a lot of houttuynia out because its all-green form spreads quickly and I have no use for it. 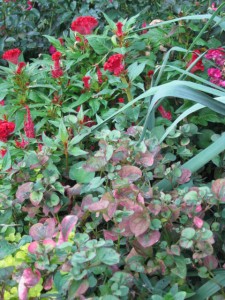 I cut back the coreopsis “Moonbeam’ a couple of weeks ago and it is returning with its lemon yellow flowers that accent the golden barberry bush nearby. 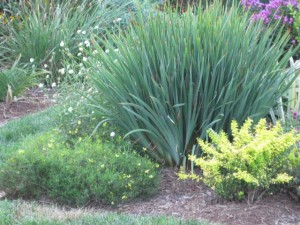 Another plant that I sheared a while back has bloomed in the pastel border, this pink primrose. It sits at the feet of the light pink rose ‘The Fairy’ and echoes its color. The first time the primrose bloomed ‘The Fairy’ wasn’t blooming so this is a new combination for the garden this summer. 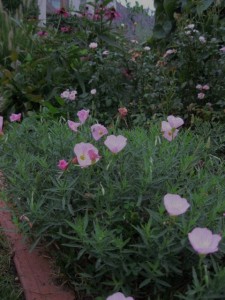 The phlox are still blooming, some better than others; the phlox ‘Laura’ is especially nice with the blue-green foliage of rue. In the white border the phlox ‘David’ is finding a complementary companion with artemesia ‘Powis Castle’. The white parterre is full swing with gomphrena leading the way. The red gomphrena ‘Strawberryfields’ makes a nice companion for blue Salvia ‘Victoria’ in another part of the garden. 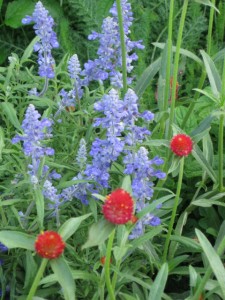 The daylily ‘Chicago Apache’ opened its very last bloom of the season. 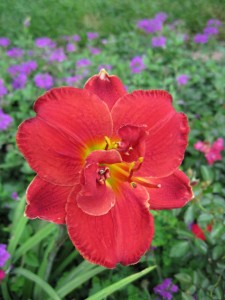 The rose ‘Olive’ got a haircut and is looking very trim. He can be a very straggly guy but the head gardener keeps him in bounds and we get a lovely large red roses in a regular cycle. 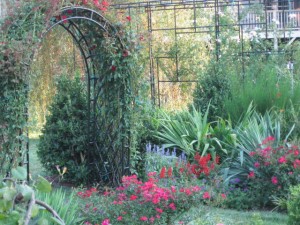 Two white roses are strutting their stuff in the rose garden.  ‘Cloud 9’  is considered a shrub rose, a group for all the roses that don’t fall into any of the other groups. 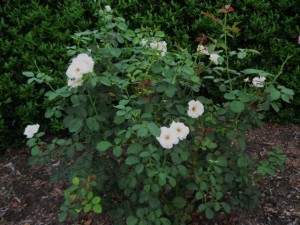 The double flowers of ‘Cloud 9’ have a simple charm with their bushy mound of yellow stamens. 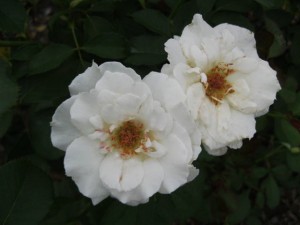 The hybrid tea ‘Pope John Paul II’ is full of buds and flowers for the third time this year. 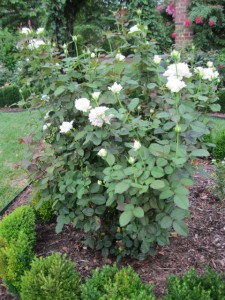 “The Pope” is probably the best rose of any in our garden. It has a attractive compact growth habit, is very disease resistant, and produces a huge number of flowers on a short cycle.  The head gardener loves to bring the flowers in for a bouquet on the table so we get double pleasure out of this rose.  I wish their were more roses like ” the Pope” in different colors. The moonvine that I am urging to grow on a wall of the rose garden is making progress but it is slow going. It is about 2 ½ feet tall now. In its defense I have to admit that the soil is dreadful and the light is impeded by the box around air conditioning unit. 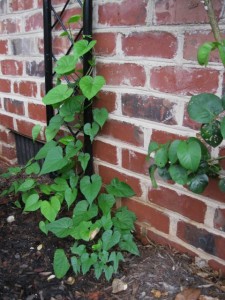 The clematis on the lamppost has rebloomed and you can see the gorgeous seed pods in the background of the new flowers. 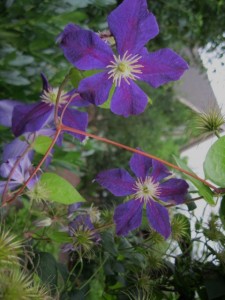 Good news in the vegetable garden! We are finally getting tomatoes. The German Johnson’s are the first, the largest, and the ugliest we grow. The birds love them too and pick at them constantly so I am now harvesting them as soon as I see pink. 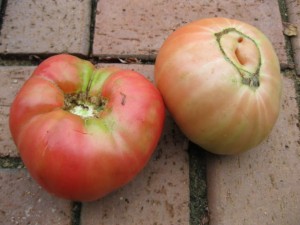 I have a bowl full of partially ripened tomatoes but am looking forward to a feast in a day or two.