A Visit to the Zhang House and Garden, Zhouzhuang, China 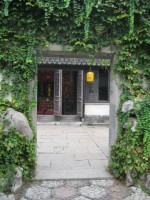 The Zhang house lies in the water town of Zhouzhuang, known to some as the “Venice of the Orient” because of its rivers and extensive canals. We had never heard of the town before our visit, let alone the Zhang house and garden, ,but our itinerary called for a stop in the town and we arrived by car in the late morning on a misty Tuesday in late September. We immediately realized that this visit was going to be unusual since the town was small and the tourists few in numbers as compared to the sites we had visited, all with 7 million plus populations and the traffic problems associated with rapid population growth. We were not disappointed; this was a fabulous town, steeped in history, full of charm, and interesting every step of the way. (We found out later, however, that Zhouzhuang is a popular tourist site of the Chinese people and is jammed on weekends and holidays.)

Zhouzhuang is located south of the Yangtze River, southeast of the city of Souzhou, about a two hour drive from Shanghia.The city dates back to 1086, the time of the northern Song Dynasty, and has close to 100 classic homes, many built on the river’s edges. The Zhang house is located on the main river just south of the Twin Bridges (lower right quadrant of map). 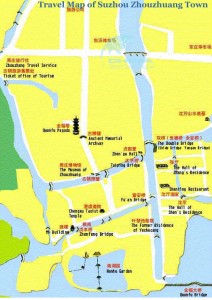 The Zhang house was built between 1436 and 1449 during the Ming dynasty by a family that sold it to the Zhang family in the early Qing dynasty and was then known as Yuyan (Jade Swallow) hall. A sign says that the house consisted of over 70 rooms and 6 courtyards. I can believe that there were 6 courtyards but not that there were 70 rooms. 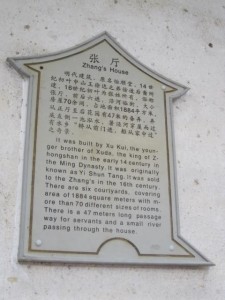 The house was built on a central axis with the front of the house perpendicular to the canal and the garden lying on the other end of the axis. Visitors enter the house by passing by a large screen of stone in a carved wood frame. 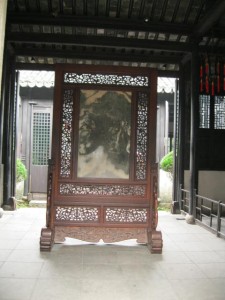 The room behind the screen was simply but elegant furnished. A doorway led to a tiny courtyard at the rear of the first room. 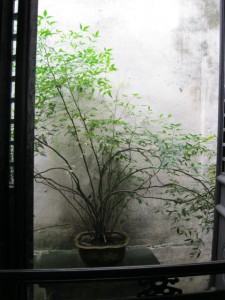 Large windows in one of the rooms looked out onto a large courtyard. 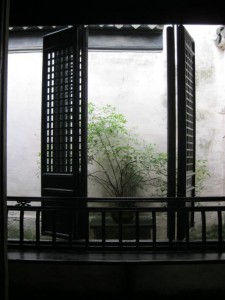 The paving in the courtyards was outstanding and added both color and texture. The garden, lying at the back of the house, had a river running through it. 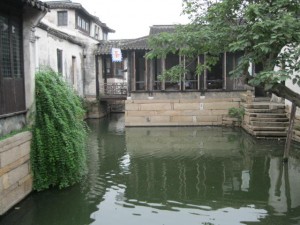 Boats were kept in the river in olden times as now. 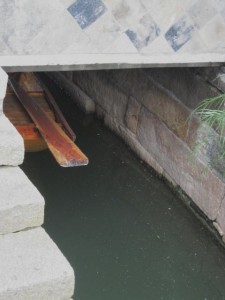 The garden area by the river included the traditional elements of Chinese gardens. 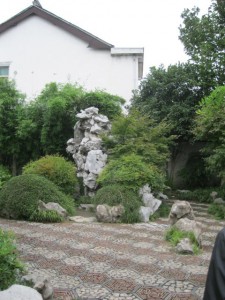 The pavement in the garden, as in the courtyards, added greatly to the beauty of the garden. 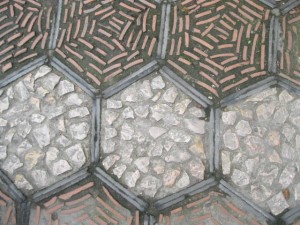 The plant material varied in textures and shades of green but was placed so that it looked natural growing with the rocks. The rocks were a dominant element in the garden. They varied in size but were similar in character. 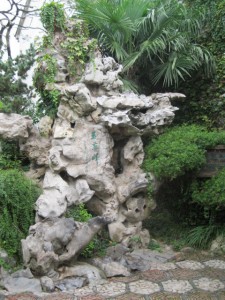 A well head was located on one side of the garden. 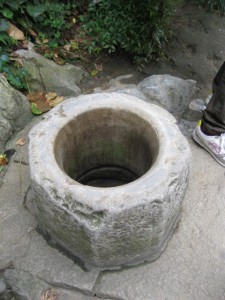 The leaky window in the garden wall added ornamentation to the wall while allowing the viewer to get a glimpse of what lay on the other side. An imposing gate led us out of the garden. 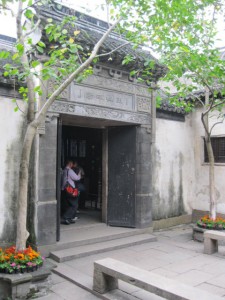 Zhouzhuang is well worth a visit. In addition to the Zhang House we enjoyed a operatic performance, a delicious lunch, and walk along the river with its numerous quaint bridges. But be sure to go during the week in the fall or spring. Avoid the hot humid summer, weekends, and holidays.