The stately Stuart period Ham house and garden sit on the backs of The River Thames in the outskirts of London offering a glimpse of 17th century life. The mansion, built in 1610 during the reign of King James I for Sir Thomas Vavascour, later became the property of Elizabeth Maitland Duchess of Lauderdale, who altered and improved the house and initiated the garden design seen today. The garden was one of the few that escaped the England Landscape movement but became overgrown until 1975 when the National Trust took over the property and decided to restore the garden according to its original 1670s design using plants that were typical of 17th century gardens. Today you can see formal parterres, a “wilderness’, kitchen garden, grand terraces, and beautiful statuary.

The statue of Father Thames in front of the house sculpted by John Bacon by was added to the garden in about 1800. It was made of Coade’s stone, an artificial stone invented in 1769 and very popular for garden statuary at the time.

Also of Coade’s stone are the handsome pineapples seen in various places. 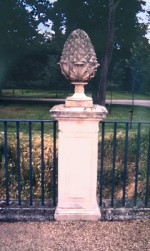 A wall near the house features niches containing the busts of ancient Roman emperors and ladies with clipped shrubs along its side. 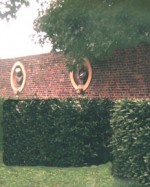 The Cherry garden is laid out in big diamonds and triangle with each parterre edged in box, decorated with cones, and filled with gray santolina also known as lavender cotton.

A statue of Bacchus stands in the center of the parterres. 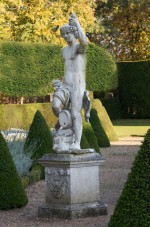 An allee of pleached hornbeams continues the formality of the garden.

The ‘wilderness’ area does not resemble a wilderness at all and can be recognized by the hornbeam hedges and grassy areas.

The grassy walks radiate through two circles bounded by the hedges, creating a maze like design. In the central clearing are reproduction of 17th century garden chairs.

Small circular pavilions may be found in some of the areas created by the hedges. 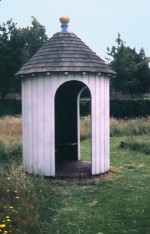 These gardens are quite unique and well worth a visit. Bring a picnic lunch to enjoy on the banks of the river and you have a great day immersed in a 17th century house and garden.