A Visit to Hardwick Hall and Gardens, Chesterfield, Derbyshire, England 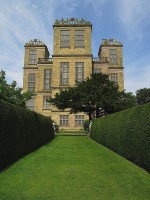 The Tudor house with its huge glass windows stands on the summit of a wind-swept hill; it is impressive and it was meant to be. It was built by Elizabeth, Countess of Shrewsbury (Bess of Harwick) between 1591 and 1597 (a rapid pace in those days) and is considered to be one of Britain’s greatest and most complete Elizabethan houses. Bess was one of the powerful people at the court of Queen Elizabeth I and had married four times accumulating considerable wealth from each union. The house and its contents are said to be a statement of Bess’ influence and wealth. The gardens that originally surrounded the house are gone and all that remain are the walls and gazebo. The garden layout that you see today dates in part to the 1870s with later additions made in the 1930s and after 1959 when the National Trust took over. The herb garden is spectacular.

The imposing entrance gate reminds the visitor that Bess of Hardwick was wealthy, in fact, she was the second most wealthy woman after Queen Elizabeth.

Between 1865 and 1907 Lady Louisa Cavendish lay out a garden in the courtyard near the Hall. She filled it with flower beds but today lawn and a flower border along the Elizabethan wall occupy the area.  Note the handsome finials of the wall. 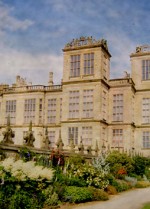 Plantings by the National Trust according to a 19th century design recall the color scheme of Gertrude Jekyll with bright colors giving way to softer ones.  Here the bright blue delphiniums stand proudly in a border that mixes blue with yellow further along. 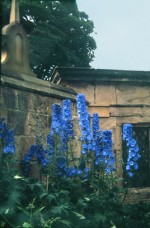 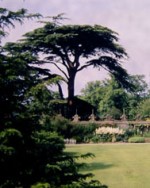 Hedges of clipped hornbeam and yews protect the gardens and visitors from chilling winds and form grand grassy alleys.

Converging paths meet at the rondel where benches invite the visitor to rest.

A statue stands in the niche carved into the hedge. 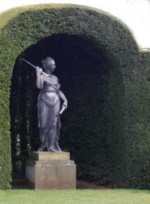 The herb garden is spectacular. Developed by the National Trust in the 1960s, it is large and contains a huge variety of herbs.

Rows of culinary and medicinal herbs are planted in blocks.

Hops and other climbing herbs are trained on wooden tripods to add vertical interest.

The long straight path along one side of the herb garden presents a view of the Hall, a reminder of the historic background of the garden and the remarkable Bess of Hardwick. 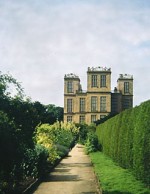