Bamboo in the Garden: Runners and Clump Formers 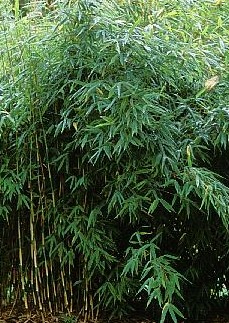 Every gardener’s nightmare is having a plant take over the garden and resist all attempts to eradicate it. Bamboo, unfortunately, is one of those plants that puts fear into the heart of many gardeners because of its reputation for relentless wandering. This is very unfortunate as bamboo can play many valuable roles in the garden such as ground cover, hedge, screen, windbreak, specimen or container plant. The attractive leaves and culms (stems) can add not only color and texture to the garden but also movement and pleasant rustling sounds as breezes pass through the garden. By learning a little about the root system of bamboo any gardener can enjoy the many virtues of bamboo without experiencing the problems.

The root system of bamboo consists of two parts, a rhizome which is an underground fleshy stem, and the feeding roots which are fine and branched. There are two main types of bamboo rhizomes, one producing running (aka invasive) bamboos, the other producing a clumping form. Most of the clumping bamboos are tropical or subtropical so most of us do not see them often, but there are some very good clumping bamboo that will do well in temperate clime. For those who fear invasive bamboos, the clumping kinds are well worth seeking. Look for species in the genera Borinda, Chusquea, Fargesia and Thamnocalamus. These are montane bamboos and hardier than most other clumping types.

The difference in growth habit is a result in the difference in structure of the rhizome. Runner, the invasive type as the name implies, are elongated and have a terminal bud that continually extends the rhizome outward until it produces a new culm. As it grows outward it produces lateral buds which develop into an ever enlarging rhizome. Clump formers, on the other hand, have short thick rhizomes that grow outward very slowly, sending up culms in a small area which we see as a clump. The clump will gradually increase in size but it will not become invasive.

Once you start looking at bamboos as a possible plant for your garden you may find yourself attracted to the invasive kinds especially since they are more readily available. In this case, consider using containers to restrict the growth of the plant and either pot sink the container or plant the bamboo in an ornamental pot to enjoy on a patio of deck. Runners have vigorous root systems than can break an ornamental pot so using plastic pots that can be put in a more expensive one is an economical option.