Characteristics of a Meadow Garden 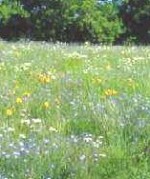 With the current interest in wildflowers, native plants, and environmental awareness, the meadow garden has become a popular topic. The image of a flower filled field on a sunny summer day is very appealing especially to those who are tired of caring for a lawn . The desire for the meadow garden has been encouraged by seed companies offering wildflower mixes that will magically turn an ordinary field into a fairy wonderland of colorful flowers with little time or effort.

Unfortunately, this is not the case. The meadows of our imagination are probably either natural clearings in woodlands, or abandon farmland that was once covered with trees and will return to a cover of trees if left undisturbed.

The key to understanding the nature of a meadow garden is grasping the concept that a meadow is an early stage in the progression to woodland. This progression is the natural process of succession that begins after fire or human intervention such as the clearing of a field and ends with the development of a climax community such as the oak hickory hemlock association in the North East. A meadow will not stay the same year after year. It will change, quickly or slowly depending on the conditions, but it will change unless steps are taken to prevent it.

Meadow gardens usually contain a mixture of grasses and wildflowers. The grasses add texture and movement to the meadow and are also important in keeping weeds out of the meadow. They may be cool-season or warm-season with the former starting off in spring, becoming dormant during hot weather when the warm-season grasses begin to reach their full beauty.

The wildflowers maybe annuals, biennials such as Queen Anne’s Lace, or perennials such as blazing star (Liatris spp.). They are usually a mix of native or non-native species that were introduced into American by early settlers from Europe and other places when they settled here. Some introductions were no doubt deliberate but many others were probably accidental and came in on animals, in food, and other diverse ways.

The maintenance of a meadow garden will involve an annual mowing or burning at the very least. In order to keep a meadow garden from maturing into a forest, the shrubs and other woody seedling must be removed every year. In addition, there may be some undesirable plants that move into the area (“the weeds”), such as smilax, that can impair the enjoyment of the garden with is wiry, thorny stems, and must be removed on a regular basis. Likewise, burdock and beggar’s ticks may gleefully establish themselves in a meadow to a gardener’s dismay and can be added to the weed list.

Most packets or cans of wildflower seed mixes offered for sale contain a mixture of species native to the Midwest and west as well as non-natives. The closer the mixture is to the native plants of your particular area, the better your chance of success but few labels contain sufficient information to be sure of the contents. Worse yet, some of the wildflower seed mixes contain seed of plants that are invasive and may end up causing environmental damage.

Establishing and maintaining a meadow garden can be a rewarding experience but it requires some thought, planning, and work. The amount of work involved may vary depending on the site, soil, climatic conditions, and composition of the plant material. The best approach is to try a small area first and expand as success dictates.