How to Cut Down Ornamental Grasses for the Spring Clean 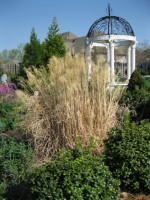 The spring clean up involves many tasks but none that I hate more than cutting down the large ornamental grasses like pampas grass or Miscanthus. The dried leaves, stalks and seed heads make a terrible mess that blows around the garden and yard with every flutter of a breeze; getting rid of the cuttings is another nightmare as we try to pound the sticky debris into the garden waste bins. This year, however, I decided to approach the task with a new procedure. I had to talk long and hard to convince the head gardener to give the new method I try but in the end he was very cooperative and found it better than past experiences. It does NOT eliminate all mess but it DOES make the task easier and less messy and it requires very little equipment.

Bungy cord
Shears, saw or whatever tool you use to cut ornamental grasses

Fasten the bungy cord around the grass mass being careful to include all the grass possible. Higher is better than lower because you will have to cut into the clump and will want to avoid cutting the bungy cord. 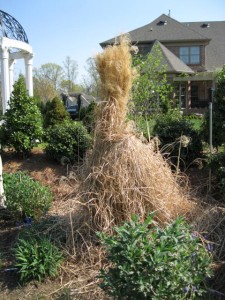 Using the tool of your choice, begin cutting the clump of grass. Go around the whole mass first and then bend it over to cut the center if necessary. A very large clump can be difficult to handle alone so if you can get a helper to hold the clump at an angle while you cut the center the task will be easier. 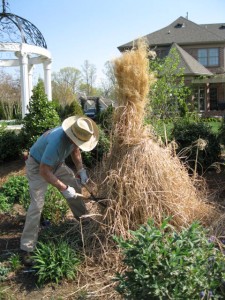 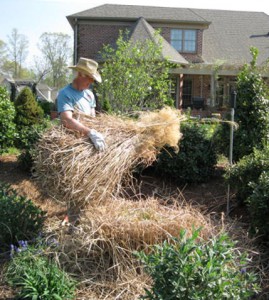 This method is shown as applied to large grasses but it is equally effective on small ones such as the pennisetums that we cut back in the fall. Please remember that this method does not eliminate the mess but it does reduce it. Cutting on a windless day, disposing of the waste material promptly, and having the waste bins very near the clump of grass will all help reduce the mess of the light dry grass debris.