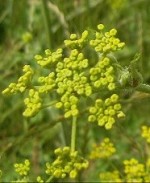 Brought to North American by European settlers for the food value of its root, wild parsnip escaped from gardens and is now found in most of the continental United States. It is considered an invasive weed in Wisconsin, Michigan, Ohio, Pennsylvania, Tennessee, and Virginia. It thrives in sunny areas with moist to mesic soil but does well with less sun and dry soil. It can be found in pastures, fields, roadsides and similar sites. This is not a plant to fool around with as its shoot and leaves contain furanocoumarin, a photosensitive substance that can cause severe chemical burns on contact with skin.

Description: Wild parsnip is a biennial weed that forms a rosette of leaves about a foot tall its first year. The leaves are pinnate, coarsely toothed and consist of five to eleven shiny, yellow-green leaflets that are diamond or mitten shaped. In the second year, the plants sends up flowering grooved shoots two to five feet tall with alternate leaves similar to those in the rosette but smaller. From May to August upper branches terminate in large, flat-toped flower heads resembling those of dill and fennel. The flower heads are 4-8” across and consists of numerous tiny flowers with yellow petals. The brownish-yellow seeds are flat, round, and winged. The taproot is thick, fleshy, and edible.

Control: Hand digging first-year rosettes is the best method of control. Removing flowering stalks before seeds are produced is important to reduce the spread. Herbicides containing glyphosate such as Roundup are effective.