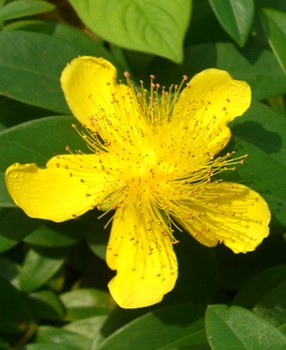 Hypericum is the generic name for a group of flowering plants in the Hypericaceae family and generally known as St. John’s wort. The genus has 490 species and includes herbaceous annuals and perennials, as well as shrubs and small trees. Plants may be deciduous or evergreen and have simple leaves, and pale to dark yellow flowers usually with five petals. Most do well in partially shaded sites with moist soils. The generic name Hypericum refers to the use of the plant to ward off evil by hanging plants over religious icons on St. John’s Day, June 24.

H. calycinum, a native of Southeast Europe and Turkey, is prostrate or low growing, stoloniferous shrub that is commonly used as a ground cover. The blue-green leaves are three to four inches long and have conspicuously netted undersides. The bright yellow flowers are two to three inches wide and have hundreds of stamens with reddish anthers, resembling a beard and leading to the common name, Aaron’s beard.

Another well known species is H. perforatum, common St. John’s wort, a native of Europe and Asia but common now in parts of India, China, and North America. It has a long history associated with driving out devils and St. Johns the Baptist; it was said to bloom first on St. John’s birthday and bleed red oil from its leaves on the day in August when he was beheaded. The ancient Greeks and Romans used the herb to dress wounds and later societies used it the cure digestive problems, repair nerve damage, and to ease depression.