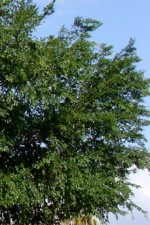 If you have a yen for a tall stately elm but fear Dutch elm disease you might be tempted by ‘Emer 11” Chinese elm which is resistant to the disease. This cultivar is one of several introductions that has the structure of an American elm and so is a good substitute. It quickly grows to 40-70 feet tall and has a rounded habit with arching branches. The leaves are dark green and similar to those of American elm although smaller. Inconspicuous flowers are produced in the late summer followed by samaras. Winter interest in added after the leaves falls by the bark that exfoliates to produce beautiful lacey patterns in shades of olive, gray, green, orange and brown . The tree transplants easily in early spring and early fall and adapts to extremes of pH and urban conditions.

Form: Broad vase-shaped; round top with arching branches at maturity

Pests and Diseases: Although resistant, Chinese elms are not immune to Dutch elm disease, some cultivars more than others; susceptible to Elm yellows.

Outstanding Selection: ‘Allee’ (up to 70’ tall; most resistant to Dutch elm disease).

Previous post: Book Review: What to Drink with What you Eat