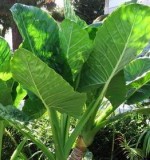 Also called giant taro, this tender herbaceous perennial is native to tropical areas from India to Queensland, Australia where it grows in the understory and along streams. It grows very quickly and can be cultivated as an annual in USDA zones 4-8 to give a lush tropical appearance to the garden. It is a member of the arum family (Arceae) that also includes jack in the pulpit, skunk cabbage, caladium, and peace lily. Like other members of the family, elephant ear has a spadix bearing many small flowers and is partially enclosed by a leafy bract, the spathe. The spathe and spadix of elephant ear is eight to ten inches long, greenish, and not showy. The plant is grown primarily for its huge attractive peltate leaves carried on long petioles that emerge from a stout trunk six to twelve feet tall. The glossy medium green leaves measure three to six feet in length and two to four feet wide. They have arrow- shaped bases, and point upward. Where grown as an annual, the rhizomes can be dug in the fall and stored in a cool, dry location until spring. Several attractive cultivars are available including ‘Blackie’ with almost black foliage and ‘Violacea’ with violet-tinged foliage. Although the plant is cultivated for its edible rhizome and shoots, all parts of the plant may cause stomach problems if eaten without cooking and proper preparation. The sap can cause skin irritation.  The genus name, Alocasia, is from the Greek prefix meaning without/not, and Colocasia, the name of a closely related genus from which it was separated. The  specific epithet, macrorrhiza, comes from the Greek words macro meaning large and rhiza meaning root and refers to its large edible root.

Bloom: Small flowers are produced on a spadix throughout the growing season.

Care: Protect from wind; water during times of drought; cut back faded foliage in fall.

Pests and Diseases: Susceptible to mealybugs and scale.