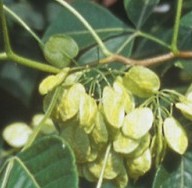 Also known as stinking ash and wafer ash, this deciduous small tree or large shrub is native to North and Central America where it grows in central and eastern US in open woods and prairies. It is a member of the rue family (Rutaceae) which includes citrus trees. The dark reddish brown branches have glands that produce an exude with a unique scent that is also given off by the flowers and bruised leaves. It is generally considered unpleasant although there are some people that find it agreeable. The compound shiny dark green leaves are oval to oblong and are three to five inches long by two to three inches wide. In late spring tiny greenish white flowers appear in terminal clusters and are followed in the fall by round pendulous winged seed pods one inch across, containing two seeds and persisting into mid winter.  Hop-tree is drought tolerant and a good choice for a hedge,  screen, or specimen especially in a xeriscape.  The seedpods resemble hops which accounts for its common name hop tree. The thinness of the seedpod accounts for the common name wafer ash, while the smell of the leaves, flowers,and branches gave rise to the common name stinking ash.   The genus name, Ptelea, is the Greek word for elm and refers to the elm like appearance of the seeds. The specific epithet, trifoliata, relates to the three divisions of the leaf.

Care: Prune in spring if necessary