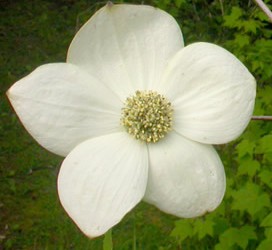 Also called mountain dogwood, this flowering deciduous tree or tall shrub is native to the West Coast from southern British Columbia to the mountains of southern California, with an isolated population in northern Idaho. It grows along stream banks and on gentle slopes in low elevation forests. The dark bark is smooth the branching is horizontal and tiered. The oval leaves are pointed at the tip, and measure up to 4.5 inches long. They are dark green during the summer but turn yellow, orange, or red in the fall. The small greenish white flowers are produced in a cluster that is surrounded by four to eight showy pink tinged white bracts that are up to three inches long. Flowers appear in the spring and sometimes again in the fall. The fruits are 1/3 inch long and mature to bright orange or red. Pacific dogwood is similar to flowering dogwood (Cornus florida) , native to the East Coast, but can be distinguished from it by its bracts which are usually greater in number and have pointed rather than notched tips. It is considered by some to be temperamental when grown outside of its native range but makes an outstanding ornamental tree when its needs are met especially when grown as a specimen or in small groups associated with a woodland garden. The genus name, Cornus, comes from the Latin word, cornus, meaning horn and probably refers to the strength of the wood.