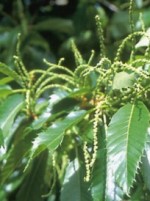 History buffs will be interested in this large, long-lived, magnificent tree as it was cultivated over 3,000 years ago and introduced to England by the Romans about 2,000 years ago. Historically, the tree has been an important source of wood as well as nuts that have been extensively used in cooking and are still sold roasted by vendors in the streets of modern cities from Paris to London and New York. The trees can grow up to one hundred feet and have distinctive spirally ridged bark. The long, shiny green, corrugated leaves have coarsely toothed margins and prominent veins, and turn gold to bronze in the fall. The upright, creamy-yellow flowers are borne in male or female catkins on the same tree and female flowers produce prickly, burr-like seed cases containing one to five nuts. Cultivars prized for their nut production, however, such as ‘Marron de Lyon’, ‘Paragon’ contain a single large nut in each seed case. Since flowers on the same tree are not compatible at least two trees are necessary for nut production. Trees take well to heavy pruning and can be cut to the ground. Unfortunately, Spanish chestnut grown in American is more susceptible to chestnut blight than trees grown in Europe so they have not attained the large size and beauty of the European specimens. Where healthy Spanish Chestnut can be grown they makes prized shade trees for large park like areas and was very popular in seventeenth and eighteen century England.

Care: Litter can be a problem. NB disease issue