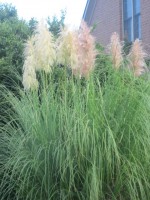 Ornamental grasses are versitile and can soften the look of a garden as well as give a naturalistic feel.  They are valued for their different textures and colors and the way they add  catch light and bring movement to the garden.  Grasses are generally easy to grow, require little maintenance and can be useful as an architectural accent, backdrop, edger, hedge, screen, windbreak, erosion control, groundcover, and for a container or rock garden.  Many grasses need a considerable amount of water but some are drought tolerant and do well with occassional waterings when rainfall is  limited.  Here are 6 ornamental grasses that are considered drought tolerant.  They are all beautiful additions to the garden especially to a xeriscape and can be combined with annuals, perennials, shrubs, and trees to provide year round interest.Blue Gama (Bouteloua gracilis)

Also called mosquito grass, this warm-season tufted perennial  is native to southern and western US  where it was the dominant grass in the short grass prairie and grows in the plains as well as open rocky woodlands and abandoned sites. The narrow,  green to  bluish gray leaves form dense clumbs 12-15″ tall that turn golden brown in the fall sometimes with red or orange tints.  The purplish-red flowers appear in 2″ long, comb-like spikes above the foliage on arching stems 24″ long from early to late summer.  The spikes form horizontally on one side of the stem and resemble a swarm of mosquitos or other insect.  Plants are very drought tolerant and can be used in beds, borders, meadow, prairie, rock, container, wildflower or native plant gardens and are especially valuable in xeriscapes.  The flowers are attractive in dried arrangements. 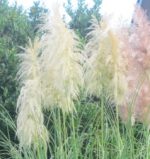 Native to  Brazil, Argentina and Chile, this perennial grass  forms large clumps of arching, narrow silvery-gray/blue-green leaves with finely toothed margins. In August large blond to pink plumes appear above the the foliage and persist into winter when most other plants are dormant. They look especially well placed against a dark background or where they can be back lit. Used as a specimen plants, hedge, or back of the border planting, pampas grass provided an architectural statement. Since the plants have razor sharp leaves, however, they should not be located on a walk or near a place where people are likely to brush up against them. They are vigorous plants and can become invasive so have been banned in some countries. Plumes are attractive in both fresh and dried arrangements.

Native to prairies, open woods, rocky slopes and roadsides of the western plains states, this perennial grass has erect to arching leaves that are 6-36″ long.  The flowers and seedheads are carried in airy panicles on 4′ long stems and are narrow a first but spread to 12″ wide.  The flowers are bright green tinted with red from midsummer to early autumn and then  turn buff-brown.  Plants are drought tolerant and a good choice for beds, borders, cottage, native plant, prairie, and wildflower gardens.

Also known as sheep’s fescue, this cool season perennial grass was  native to Europe but has been bred for color, texture, flowering habit, and size and now is represented by over 25 cultivars.  Plants form dense, fine textured, evergreen or semievergreen clumps 6-12″ tall and can be bright blue to dark green depending on the cultivar.  Terminal panicles of flowers appear well above the foliage in  late spring to early summer and may be showy or inconspicuous. Atleast one cultivar, however, lacks flowers.  When present, the flowers are light green tinged with purple at first but turn buff colored as they mature and are considered unattractive by some gardeners.    The plants are drought and pollution tolerant and are very attractive as groundcovers and edgers, and in containers and rock gardens.  The plants are short-lived and the foliage may die out in the center in hot humid climates. The most popular and widely available cultivar is ‘Elijah Blue’ (soft powdery blue, medium texture, 8″)

Blue oat grass is a clumping, cool season, evergreen to semievergreen ornamental grass, native to Eurasia where it grows in meadows and on  dry hillsides. Plants  form a dense tuft 12-18″ tall of arching, metallic blue leaves with sharply pointed tips.  In early to mid summer, spikelets of oat-like flowers  appear  in open panicles on arching stems 1-2″ above the foliage.  The flowers are bluish white at first and dry to a golden wheat color.   Plants resemble blue fescue (Festuca glauca) but are larger.  Blue oat grass is valued primarily for its blue foliage and is attractive in borders or as a  groundcover, as well as in Meditrranean, rock and coastal gardens.

This evergreen, clump-forming, perennial grass is native to higher elevations of eastern Arizona, New Mexico, west Texas, and northern Mexico.  Plants form dense fine-textured mounds of narrow  leaves 1-3′ tall.   In late summer and fall  3-4′ long erect spikes carry cream colored flowers that turn tan as they mature.   Pine muhly grass resembles California deergrass (M. rigens) but is only about half the size so is suitable for smaller gardens.  Since pine muhly grass is heat and drought resistant it is a good choice for xeriscapes and can be used as a hedge, accent plant, or groundcover, and in containers.