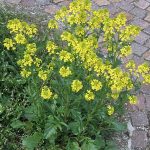 Native to areas of northern Africa, Europe, and Asia, this winter annual  grows 4-8′ tall and has a dull gray branchless stem and 10″ long stalked leaves that are obovate and lobed below, and elliptic or lanceolate above.  The upper surface of the leaves has scattered stiff, short, white hairs while the lower side is smooth except along the midrib.  Two inch long racemes of yellow flowers appear in summer for a long bloom time.  The flowers are each 1/3″ long, have 4-5 petals, and give way to a narrow seedpod 2/3″ long containing 4 seeds.   Leaves, seeds, and stems are edible and the seeds are used to prepare hot mustard.

Mustard is mentioned 5 times in the Bible,  but only the seed of the plant is referenced, and all mentions are in the New Testemen and in the same contextt.  Mustard plants can be very tall but are not generally considered to be trees and while the concept of birds perching in the shade of the plant is possible, their perching on the branches is thought provoking.  Although it is clear that mustard was cultivated it is not clear where or how it was grown  as both field and garden are mentioned as possible sites.  Rabbinical sources suggest that Jews did not grow the plant in gardens.  The invasive nature of the plant was well known in ancient times and Pliny the Elder in the first century AD remarks that once planted in the garden mustard is imposible to erradicate.

Jesus teaches through parables as he travels to Jeruselem.

31 “He [Jesus] told them another parable: “The kingdom of heaven is like a mustard seed, which a man took and planted in his field.” 32 “Though it is the smallest of all seeds, yet when it grows, it is the largest of garden plants and becomes a tree, so that the birds come and perch in its branches.”
Mathew 17 (NIV)
20 He [Jesus] replied [to the disciples]… Truly I tell you, if you have faith as small as a mustard seed, you can say to this mountain, ‘Move from here to there,’ and it will move. Nothing will be impossible for you.”
Mark 4 (NIV)
31 It [the kingdom of God] is like a mustard seed, which is the smallest of all seeds on earth. 32 Yet when planted, it grows and becomes the largest of all garden plants, with such big branches that the birds can perch in its shade.”

“ It [the kingdom of God] is like a mustard seed, which a man took and planted in his garden. It grew and became a tree, and the birds perched in its branches.”

“He [Jesus] replied [ to his apostles], ‘If you have faith as small as a mustard seed, you can say to this mulberry tree, ‘Be uprooted and planted in the sea,’ and it will obey you. ”

Black mustard grows quickly from a tiny seed, selfseeds, and  produces allelopathic chemicals that inhibit the germination of other plants so can become invasive.  It likes full sun to partial shade and average, medium moist, well-drained soil.  Pests include aphids, cabbage worms, and flea beetles.

The genus name, Brassica, is the classical Latin name for cabbage.  The specific epithet, nigra, is the Latin word meaning black and refers to the color of the seeds.