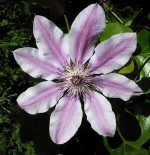 This early large flowered deciduous climber is a hybrid cultivar dating from Victorian times when species from Asia were imported to Europe.   It is a member of the buttercup family, Ranunculaceae, that also includes columbine, hellebore, and delphinium.  It has compound green leaves and quickly grows up to 10′ long climbing in/on other plants  and garden structures by twining.  Plants are very floriferous and bloom twice, one in the late spring to early summer and then again in early autumn.  The flattish, star-like flowers are 6- 8″ across and have conspicuous reddish stamens surrounded by  8 pink-lilac petal-like sepals, each with a carmine stripe. The flowers give way to atractive globose seed heads.  The abundance of large showy flowers has made ‘Nellie Moser’ a favorite for growing on porches, walls, arbors, trellises, fences and other garden structures as well as through other plants and in containers.  The flowers are good in the vase.  The genus name, Clematis, is from the ancient Greek word klematis referring to a climbing plant.  The cultivar name Nelly Moser probably honors a member of the family of Marcel Moser,  clematis breeder.

Bloom: Six-eight inche side flatish star-shaped flowers composed of 8 pink-lilac sepals with a carmine strip, in late spring to early summer and again in early fall

Care: Prune in late winter to early spring before growth begins  just above a pair of healthy buds and again immediately after flowering. (Pruning Group 2)