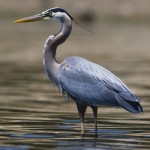 Beware of the great blue heron! If a large gray cloud comes suddenly out of the sky and drops down on the edge of your fishpond, drop whatever you are doing and run shouting and waving your arms toward the bird. If you hesitate you will lose your fish! Not that we dislike great blue herons; they are unique and interesting birds and we even have a pair of bronze ones as garden ornaments, but we are not happy with their choice of entrée. When the heron first came to our pond he confined his hunt to the flagstone edge and never got his feet wet. Perhaps he didn’t need to as our fearless fish probably swam right up to the surface thinking they were about to be fed. Nine months later when the heron visited again no fish greeted him and he hopped right into 3 feet of water and grabbed them from the bottom where they huddled together for safety. We have ordinary goldfish but our neighbor has koi that is, he did have koi until the heron has visited his pond and now he has none. The neighbor suggested that our pair of bronze herons attracted the fish eating one but we have moved the pair and still are visited by the live one. Still, I will agree, they are very attractive and interesting birds.

Color: Blue-gray back, wings and belly; black shoulder, brownish-buff neck with white and black streaking; white crown and face with black plume from above and behind eye to beyond the back of the head; shaggy plumes on neck and back; sexes similar but not identical, the long gray legs and long thick dull yellow bill briefly become orange at the beginning of the breeding season.

Song/Communication: Harsh croaking ccrraaaaaaaank call when taking flight but have a total of 7 different calls. Exhibit a series of posing displays for mating.

Habitat: Areas near water such as marshes, swamps, rivers banks around ponds and lakes.

Range: Across the US, southern Canada, and Pacific coast up to Alaska; Mexico, Caribbean, Central America, Galapagos Islands; some will migrate to as far south as north-western South America.

Nesting: Each year pairs of great blue herons nest in large colonies in trees where the female builds a platform nest of twigs brought to her by the male. The female lays 3 to 6 pale blue eggs that she incubates for about 28 days. Both male and female feed the young for 2 to 2 ½ months until they are old enough to leave the nest.

Feeding: Feeds mainly on fish but will eat a variety of wetland and aquatic animals including amphibians, reptiles, birds, small mammals, and invertebrates. They will wade up to their bellies in water or walk in dry fields in search of food.

Backyard Tips: Protect the fish and frogs in your fishponds. Do not feed your fish with surface floating food as this will encourage them to come forward when someone/thing approaches.

Next post: A Visit to Hever Castle, Kent, England