Ahh…what a beautiful wedding!  From the floral decorations of Westminster Abbey, to the bride’s maids’ flowers and the bridal bouquet, everything was elegant and classical.  The very first glimpse of the interior of Westminster Abbey set the tone for the entire wedding and it was no surprise when Kate stepped from the limo in her graceful wedding dress with her exquisite bouquet, perhaps reminding us of Grace Kelly when she married the Prince of Monaco.

The floral bouquet, of course, has to complement the dress and Kate’s certainly did.  Just as the dress was delicate and refined, so was the bouquet. The bouquet was in the shape of a shield with flowers wired and held together in a bouquet holder.  The featured flowers were lily of the valley, sweet William, and hyacinth, chosen for their significance to the families of both bride and groom and according to the language of flowers.   A sprig of myrtle was included in the bouquet as it has been since 1840s when Queen Victoria first included it in her wedding bouquet when she married Prince Albert.   Every British royal bouquet from that time onward has included myrtle that comes from that same tree in Queen Victoria’s garden at Osborne House on the Isle of Wright. 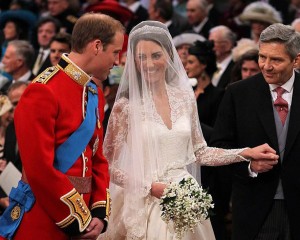 According to the language of flowers myrtle stands for love, lily of the valley sweetness and humility, and hyacinth for constancy in love.  Sweet William may symbolize gallantry or have  been included for its obvious reference to the groom.  The florist who designed the bouquet is known for his use of the language of flowers, an 18th century custom that applies meanings to flowers and fashioning bouquets with complex meanings. 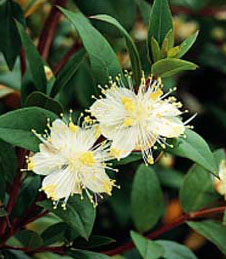 The four bridesmaids and maid of honor were adorned with dainty florals that carried out the refined and classical look.  The maid of honor had a spray of flowers in her hair and carried no bouquet.

Her hands were well occupied by holding the hands of the two youngest bridesmaids and guiding them down the aisle.   These charming little girls carried pomanders, or should I say, had a pomander on their wrist, a very useful type of bouquet for small children who my have trouble carrying a bouquet. 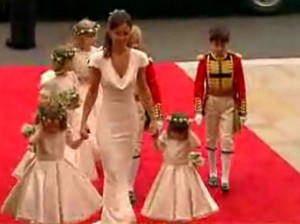 The two older girls carried small nosegays and all four bridesmaids wore garlands on their heads. 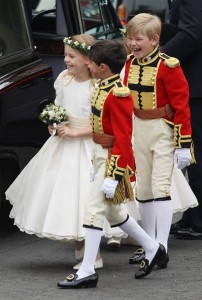 Keeping the garlands where they belonged became an issue for at least one. 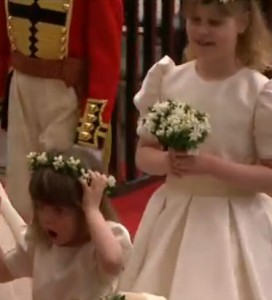 Westminster Abbey was decorated to suggest an English garden with an avenue of trees created by English Maples and seasonal, native plants including hornbeam, azaleas and rhododendrons.

Lavish amounts of greenery and flowers adorned the pots in which the trees were growing, as well as other containers, and vases.  The royal couple was keen to have as many plants as possible planted after the wedding and other plant material to go charities. 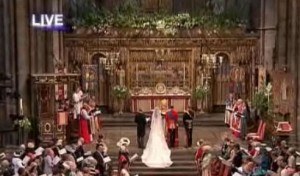 At the reception, the cake was a masterpiece of floral art and included over 900 individually iced flowers and leaves of 17 different varieties of plants.  A garland around the middle of the cake matched the architectural garlands used to decorate the room in which the cake was shown. 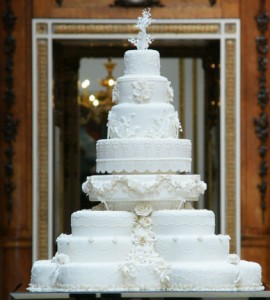 Among the flowers adorning the cake were the white rose for England, thistle for Scotland,  shamrock for Ireland, daffodil for Wales (and new beginnings), and both the acorn and oak leaf for the Middleton family.

The marriage of Catherine and William was surely a fairytale wedding.  Experts expect Kate’s wedding dress to change the taste of brides everywhere but what about the bridal bouquets?  Will brides again turn to bouquet holders and wired flowers after so many years of hand-tied nosegays?  Can we expect to see more children in weddings with garlands and pompanders?  And will brides clamor for lilies of the valley?  The flowers of Kate’s wedding were simple and understated but they were also very expensive.  All that wiring takes time and labor and labor costs money; lilies of the valley are expensive any time of year (like spring) but just try to get them in the summer, fall, or winter and you will pay a king’s ransom for them and they may not be as nice as Kate’s.  Many brides may dream of a fairytale wedding with the understated elegance of Kate’s but few will be able to afford it.

Previous post: How to Select a Site for Growing Strawberries