The Language of Flowers: Introduction 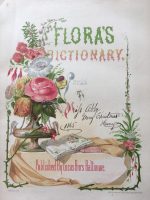 The language of flowers, also called florography, refers to the use of flowers and plants to secretly communicate with others.  It is the result of the a blending of traditions from two cultures: the symbolic meanings of plants from westestern  civilization beginning in ancient times ; and  the Turkish language  of objects, Selam, which contributed the idea of sending cryptic messages through symbolic objects such as flowers.  The interest in the language of flowers reached its height in the Victorian age and floral dictionaries became essential for deciphering the meaning of bouquets.  One such work, Flora’s Dictionary, was written by Elizabeth Wirtz of Richmond ,Virginia in the mid 1800s. This dictionary was immensely popular and is the main source for the  Language of Flower posts on this website concerning  specific flowers and their meanings. 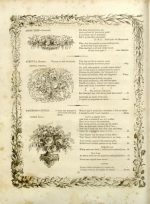 Mrs. Wirtz was well educated and appears to be quite knowledgeable in the field of botany.  She includes in her dictionary a great amount of information on taxonomy and descriptions of plant anatomy, in addition to the more traditional information related to the language of flowers.  In the section of the book dedicated to the language of flowers the entry for each plant contains both the Latin and common name, symbolic meaning,  several quotes referring to the symbolic meaning, and in some cases quotes that may be used as answers to the original quotes.  Each entry  is accompanied by a black and white floral illustration that is unrelated to the plant and used several other times throughout the dictionary. Several full page colored illustrations of flowers or bouquets are also included but the flowers are not identified.