June has been difficult month with some very hot dry periods and some cold periods. Many plants are already struggling and the whole garden seems to want to bloom now before the horrific days of July get into full swing. On the bright side, this has been the month of lilies, true lilies as well as daylilies, and they are glorious! They began in late May but new ones appeared as the weeks rolled onward. On the practical side, the vegetable garden is well underway with radishes, beets, and lettuce winding down while the warm weather crops chug along.

The allee boasts the greatest number of different daylilies. The earliest were simple yellow ones that began in May but now the sunny side of the allee is filled with many different kinds boasting many different colors. Some special favorites are ‘Double Dribble’ 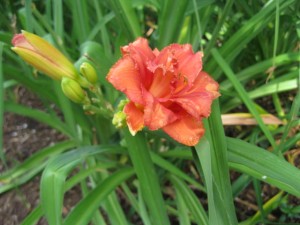 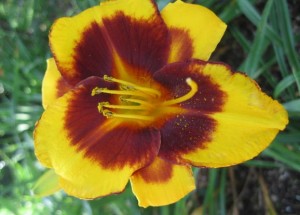 And ‘Strawberry Candy’ (the favorite of the headgardener). Doubles and bright contrasting colors are easy to notice but there are some more delicate ones that don’t scream at you but are equally pleasing. 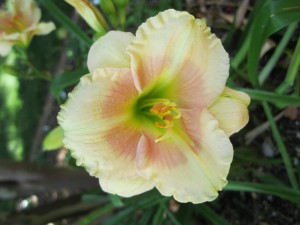 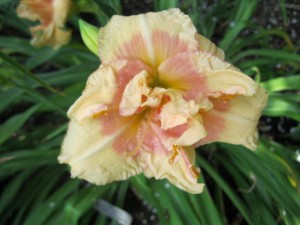 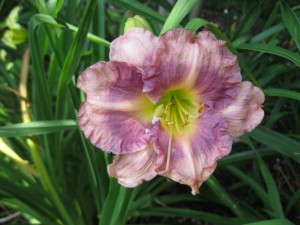 This little charmer from my garden in Annapolis is set in front of variegated Cornus ‘Elegantissima’ and peaks out from under bronze fennel. 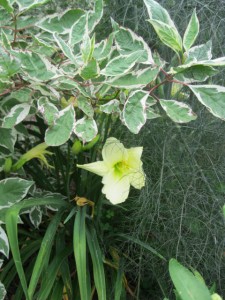 I tried daylilies behind the iris in the pool garden but do not like the result because of the color; way to orange. I will pull these out in the fall and try some others that may be more compatible with the roses that are on the arbor at the other side of the area. The yellow tiger lilies that started in May have grown tall and have coreopsis ‘Zagreb’ growing at their feet. Torch lilies and yarrow make another nice combination nearby. The scarlet Asiatic lily ‘Grand Paradiso’ pairs well with orange butterflyweed early in the season and crocosmia ‘Lucifer’ later on. 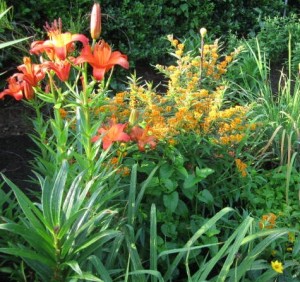 The annual nasturtium, a cool weather plant, was new to the garden this year. I grew them from seed and love the vivid orange color that picks up the color of ‘Grand Paradiso’. 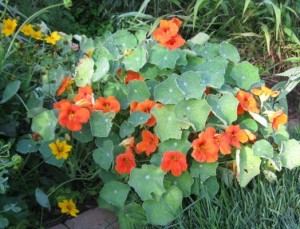 The blue of Platycodon, balloon flower, cool down the hot colors of this border, A white platycodon that I have cut back to prevent floppiness has managed to be more beautiful than ever with Salvia ‘Victoria’. 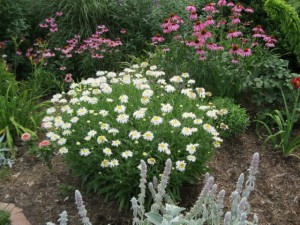 The grass Miscanthus ‘Morning Light’ echoes the mound formation and color of white daisies and creates a background for pink coneflowers. 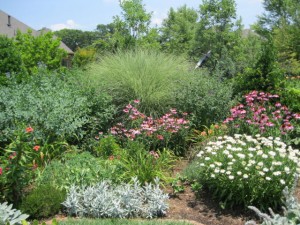 The hollyhocks have returned. I never know what to expect because I just let them reseed themselves. The roses usually do “their thing” in May and then take a 6 week siesta before getting in gear again. Some take longer than 6 weeks and none bloom as they did in their first May flush but they are still pretty. A trio that includes two Buck ross and one David Austen are reliable re-bloomers with lots of beautiful flowers. One rose forgot about the break and has been blooming none stop since May. Some of its branches have hopped the wall into the secret garden The gazebo has a new look; an urn filled with geraniums. In the vegetable garden the squash are enjoying the heat and sunshine. I pick them when they are about 4″ long and I still have more than we can eat. The eggplants are also doing well and tonight we will have eggplant parmesan with the harvest from 3 plants. The tomato plants are heavy with fruit but its all green so it will be a while before we can harvest. I have only had a ripe tomato by the 4th of July once so I am not surprised but look forward to a hefty crop if our luck holds. The blueberry bushes are covered with berries but so far not a single ripe one has shown itself. Odd, because this time last year we had bowlfuls. But the lettuce has bolted and that tells you something.