I am not the only one decrying miseries of the heat and humidity this week; the plants are right with me. To make matters worse, there has been no rain so 95 degrees with high humidity has been a hardship for most of them.

We have pumped up the irrigation and I do a lot of hand watering so we haven’t had any fatalities yet and the lawn is still hanging in there. The daylilies have been great fun this week in spite of the heat. Most bloomed at least once or twice;either their last bloom or their first. Most of them, however, are tapering off and everyday I cut down more stalks as the last flower on them fades. 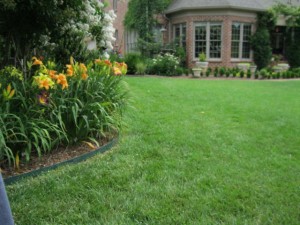 The new ones worthy of note include these:

‘Bold Tiger’ with its red eye and orange petals lives up to its name. 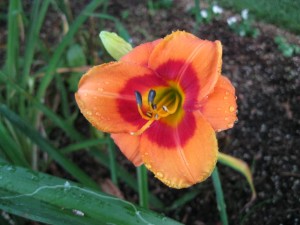 Much less flashy but perhaps more interesting is a flower of ‘Lady Neva’ with its unusual form and large size (7”). 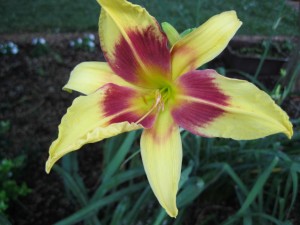 ‘Blood Spot’ has a smaller flower (4.5”) but an intense red color that looks fabulous in a hot border. 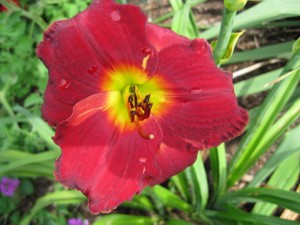 ‘Big Kiss’ a called a double but it looks like more than that. 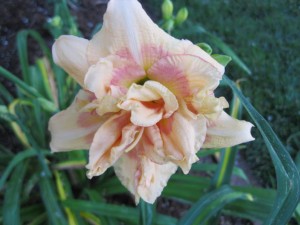 ‘Panda Bear’s pale yellow petals with wine colored edging and eye make it a standout and especially appealing with several blooming at the same time. A day lily flower lasts only one day. Others may replace it the next day so since stems carry multiple buds any given stem may appear to bloom for several days. All those faded flowers could create an ugly sight. 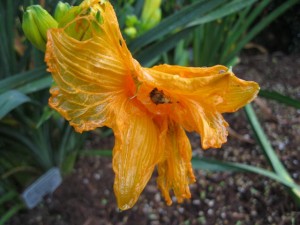 Some day lilies are self cleaning (drop their faded flowers neatly) but most of mine do not so I deadhead them everyday. The deadheading also encourages the plant to put its energy into the developing flowers rather than producing seeds. One round gives me a bucket full of faded flowers. A deer beat me to this one. 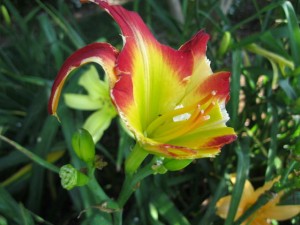 Since the end of the day lily bloom was in sight, I decided to work on planning the daylily beds for next year taking into consideration color. I want to plant together cultivars that complement each other rather than fight or create confusion. With this aim in mind, I cut a flower from each cultivar and but them in vases by color groups. 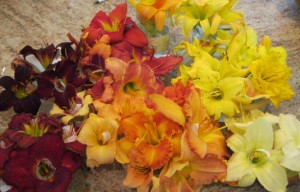 By moving the flowers around I could find some nice combinations.  Many day lilies looked terrific with dark purple ones but they are the least vigorous in my garden and even old clumps are small so I can’t plan to have many of them quickly.  Here are some combinations i liked:   ‘Double Dribble’ and ‘Blood Spot’. ‘Today’s Charm’ and an unknown day lily with an peach blush. This week was also mulch time and a good thing too with all the drought. An truck load was delivered to the driveway and the head gardener had to buggy-lug it all over the garden area. 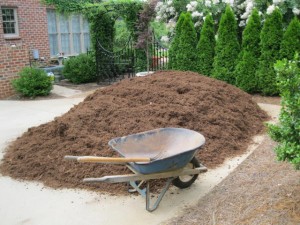 This was a good time for mulching as the mulch was dry and light so using with a 10 pronged pitchfork to load it in and out of the wheelbarrel worked well. 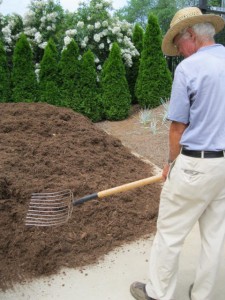 The formal garden had some new blooms. The Russian sage is in its full glory. 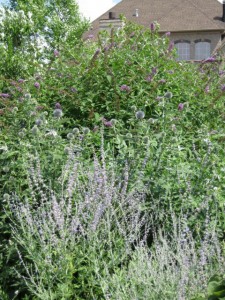 Globe thistle blooms near it, contrasting it in form. 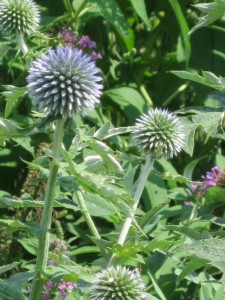 Pink garden phlox grows in front of a stand of Russian sage and behind the foliage of tall Siberian iris. This dwarf beebalm is a gem that has been almost gobbled up by its neighbors. The white speedwell (Veronica alpina ‘ alba’’) that I cut back a few weeks ago has rebloomed better than ever. This was a Loews purchase that has really been a gem. It’s first year I forgot about it until fall when I pulled ‘White Fairy” rose off of it. It looked very small and sad but has come back for two years now, growing each time and putting on a show all summer as long as I cut it back after flowering. 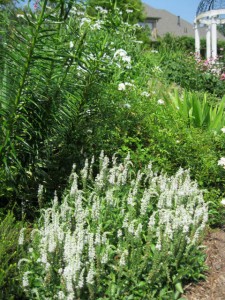 The crazy daisies are blooming their silly heads off and require deadheading everyday to keep the clump looking tidy and fresh. That celosia next to it is a volunteer I couldn’t bear to pull out, 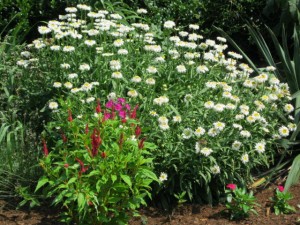 The tall spikes of liatris add color to the white border. In the hot border the crocosmia is gaining steam just as the lily ‘Gran Paradiso’ is on its last flower. Too bad, they make a great combination. Meanwhile the volunteer sunflower has found a companion in the orange lily (Lilium davidii) that seems to be lounging on it gracefully. 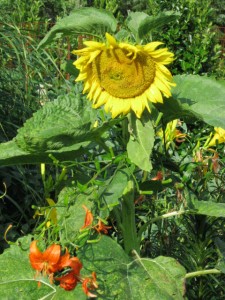 The candy lily (Pardancanda ‘Norrisii’) is finally looking like it might be an asset in the hot border. I bought it at the local farmers’ market two years ago but it has languished until now. The vegetable garden continues to do well and we have harvested some sumer squash.  I suateed them with onion and garlic and served them with couscous and grilled chicken.  Yummm. The eggplants have thrived in the heat and are big tough looking plants. Most of them have produced flowers that  are very reminiscent of those of its nightshade, one of its relatives. We continue to enjoy our blueberry crop and are eyeing another harvest of summer squash in a day or so. Heat ain’t all bad!