Native to Mediterranean woodlands and shrub lands, this tender herbaceous perennial is a member of the deadnettle family, Lamiaceae, that also includes mint, rosemary, and beebalm.  The plants grow up to 3′ tall and have 4-angled, stiff stems carrying paried, wrinkled leaves with toothed margins.  From mid-spring into summer the 3/4″ long  violet flowers are borne in whorls of 6-12 and are strongly 2-lipped.  The inflorescence consists of a strong central spike  and 3 pairs of lateral branches that bend upwards and inwards.  Gideon-Pisanty-Wikipedia

END_OF_DOCUMENT_TOKEN_TO_BE_REPLACED

Also known as bluebottle, bluet, bluecap, and cornflower, this cool weather annual is a member of the aster family, Asteraceae, that also includes daisy, sunflower, and lettuce.  It  is native to  Europe where it is now endangered in some areas due to habitat destruction, but was introduced into North America where it has done well  and has become invasive in the Northwest because of its tendency to self seed.  The narrow plants grow 1-3′ tall  and have numerous gray-green branches and lanceolate leaves. The 1-1.5″ wide flowerheads are comprised of many small ray flowers around a center of disc flowers and held together by an involucre of overlapped bracts.   The flowers bloom from late spring throughout the summer in cool climates and are usually bright lavender blue but cultivars in pink, rosy red, and white are available. Plants like full sun with afternoon shade and average, moist, well-drained soil. USDA Hardiness Zones 1-11 (Photo Credit Wikipedia) END_OF_DOCUMENT_TOKEN_TO_BE_REPLACED

A member of the water lily family, Nymphaeaceae, this tropical aquatic perennial goes by many names including Egyptian lotus, blue water lily, Cape water lily, frog’s pulpit, and sacred lily of the Nile.  It is native to parts of the Middle East, North Africa along the Nile, parts of eastern and southern Africa, and some of the nearby islands where it grows in freshwater lakes, pools and rivers. The plant grows from a tuberous rhizome and has long spongy green petioles bearing peltate leaves that are 3-17″ long and may float or lie sumerged under the surface of the water. The undersides of the leaves have a conspicuous midrib with  lateral veins on each side.  The fragrant flowers are 3-5″ across and appear in mid- to late summer on the surface of the water opening from mid morning until dusk for about 4 days.  Each flower consists of a central cluster of 100-200 stamens surrounded by 4 green sepals and 14-20 oblong petals that may be blue, white, mauve, or pinkish.   The fruit is a round flattened berry containing  seeds with a fleshy bell shaped aril. The blue lotus has been grown since ancient Egyptian times when it was used in burial rites,  for making votives, and as an ornament in garden ponds.  It was associated with the origin of life in Egyptian mythology and frequently shown along with the white lotus in stone carvings.  Its mild sedative qualities suggest that it might have been fruit of the lotus tree mentioned in Homer’s Odyssey.  In addition the rhizomes are edible.  Plants are associated with the snail that carries the pathogen for human schistosomiasis.   The genus name, Nymphacea, comes from the Greek word numphaios and means sacred to the nymphs.  The specific epithet, caerulea, is the Latin word meaning blue.
widow singles near me

Called fuzzy wuzzy by early pioneers because of its fluffy, tufted seeds, this West Coast native was important to the Indians who used its leaves to reduce swelling and its wood to make arrow shafts and houses. No one knows for sure why it is called coyote brush but theories abound and include its ability to adapt to many different habitats, its range is similar to that of the coyote, the seed pods resemble a coyote’s fur, and that it appears where coyotes urinate. Take your pick or think up reason of your own.

The plant grows up to two feet tall and has glossy, evergreen, green leaves that are fire-retardant. Male and female flowers appear on separate plants from summer into fall and are an important source of nectar for bees, predatory wasps, and butterflies. Male plants are preferred for landscaping because female plants produced messy seed pods. Drought and salt tolerant, a coyote plant can grow in many climates and soil types but prefers full sun and well-drained soils. It only needs watering during hot, dry summers. A good choice for a ground cover, xeriscapes, soil stabilization, and wildlife, native plant, and coastal gardens. Two cultivars are available: ‘Twin Peaks’ with smaller darker green leaves, and ‘Pigeon Point’ with lighter green leaves.

Also known as tiger lotus, Egyptian white water lily, and white lotus, this aquatic fresh water perennial is a member of the water lily family, Nymphaceae, a small family of 3-6 genera.  It is native to east Africa and southeast Asia where it grows in clear, warm, still, slightly acidic waters.  Growing 8-18″ tall from a rhizomatous root system it has large round leaves that are up to  12″ across and float on the surface of the water.  The mature leaves are peltate, softly hairy below, and have spiny, toothed margins.  The  flowers appear all summer, are 5-10″ across, and consists of a center of golden stamens surrounded by conspicuously veined sepals and  pointed petals that are white, sometime tinged with pink.  They open at night, close by late morning, and are held up to 8″ above the surface of the water.  The white Egyptian lotus was used by the Egyptians for perfume, funerary garlands, temple offerings, and as personal and  garden adornments.  It may have been the lotus  mentioned in Homer’s Odysseys.  Plants have medicinal properties and all parts of the plant are edible. The plant can become invasive in the rice fields of modern Egypt.  The genus name, Nymphaea, comes from the Greek word numphaios and means sacred to the nymphs.  The specific epithet, lotus, is from the Greek word lōtos, used to denote certain plants. END_OF_DOCUMENT_TOKEN_TO_BE_REPLACED 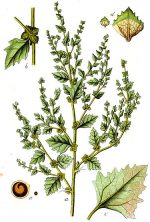 Also known as red orach, redscale, and tumbling orach, this annual shurb is native to Eurasia but  as been introduced to many areas including the US especially in the West.  It is a member of the Amaranthaceae family that also includes spinach, beet, and celosia.  Plants grow up to 4.5′ tall and have erect, hairless branching stems and green to red leaves with three prominent veins and a whitish mealy coating at least on the lower surface.  Each leaf is 1-2.4″ long,  oval to triangular or lanceolate, and has wavy to toothed margins.   Axillary glomerules or interrupted terminal spikes of small inconspicuous female and male flowers appear on the same plant from mid summer to fall.  The staminate flowers have a 5-parted perianth and are carried on the upper parts of the stems.  The pistillate flowers lack a perianth and have 2 subtending bracts that are fused for less than half their length and have sharp projections on their sides.  The fruit is a utricle containing brown to black seeds. Photo Credit Wikipedia

END_OF_DOCUMENT_TOKEN_TO_BE_REPLACED

Sisyrinchium is a genus of of about 200 species of annuals and herbaceous perennials native to the New World. The plants are not grasses and are in the iris family, Iridaceae, that also includes gladiolus, crocus and freesia. They tend to grow in grasslands where they produce low tufts of flat, grass-like foliage and star-shaped flowers with 6 blue, purple, yellow or white tepals surrounding a yellow center. Flowering occurs in late spring into summer. Plants like average to rich, consistently moist soil in full sun to partial shade. Many species are short-lived but self-seed. Blue-eyed grasses are best used in informal sites such as cottage, meadow, woodland, native plant, and wildflower gardens. The genus name, Sisyrinchium, may come from the from the Greek sys-, meaning pig, and rynchos , meaning snout, referring to the roots being consumed by swine.

END_OF_DOCUMENT_TOKEN_TO_BE_REPLACED

Native to moist grassy areas and woodlands of California and Oregon west of the Sierra Nevada, this semi-evergreen herbaceous perennial is not a true grass but is in the iris family, Iridaceae, that also includes crocus, gladiolus, and freesia. The plants grow up to 2′ tall and forms sparse tufts of sword-shaped, blue-green leaves that are 8-10″ long. From early spring to summer, flattened, branched, winged stems produce loose clusters of flowers well above the foliage. The flowers are 3/4-1″ across and have a yellow center and 6 tepals that are blue to violet-blue, occasionally white. Although each flower only lasts one day, they are produced in abundance. The dark brown fruits contain a very large amount of seed so that the plants tend to spread in the garden. After blooming the plants die back and go dormant for the summer. The plants look best when planted in large groups and are especially valued for use in informal gardens such as meadows, prairies, or cottage gardens. The genus name, Sisyrinchium, may come from the from the Greek sys-, meaning pig, and rynchos , meaning snout, referring to the roots being consumed by swine. The specific epithet, bellum, is the contraction of the Latin word belulus and means pretty.

END_OF_DOCUMENT_TOKEN_TO_BE_REPLACED

Native Americans smoked it in ceremonial pipes, modern Americans use it for many things from treating urinary tract problems to skin lightening, but bearberry is most valued as an outstanding groundcover. It is a low growing evergreen shrub with beautiful foliage and bright red berries in fall. The plants grow up to 12” tall and slowly form dense, creeping mat of prostrate red stems carrying leathery, dark green, tear-shaped leaves about 1″ long, sometimes with a bronze or reddish tinge by fall. In spring, terminal clusters of tiny, pendent, bell-shaped white to pink flowers appear that are followed by 1/2″ wide berries that are green maturing to bright red by fall. Bearberry thrives in poor sandy soil and is particularly useful  as a ground cover especially in seaside gardens because it tolerates salt and drought. It is beautiful cascading down a wall. Leaves and berries are used for Christmas decorations.  Bearberry is difficult to establish and prefers cool climates.

END_OF_DOCUMENT_TOKEN_TO_BE_REPLACED

This annual shrub is a member of the Amaranthaceae family that also includes spinach, beet, and celosia.  It is native to western Asia from Arabia to Afghanistan and Tibet where it grows in deserts, dunes, sandy places, and alluvial fans. The decumbent or spreading plants grow 5-16″ tall and are many branched.  The gray-green succulent leaves are .4-1″ long, subsessile, and ovate, deltoid, or cordate.  Inconspicuous male and female  flowers appear in the leaf axils on the same plant in summer. The leaves and seeds of the plant are edible; the leaves are eaten as emergency food and the seeds used as a thickener or in bread.  The genus name, Atriplex, is the Greek name for orach, a related plant that can be used as spinach. The specific epithet, dimorphostegia, comes from the Greek words dis meaning twice, morphe meaning shape, and stegon, meaning cover. END_OF_DOCUMENT_TOKEN_TO_BE_REPLACED