Book Review: The Reasons for Seasons 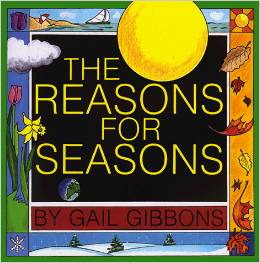 The change of seasons has special meaning to gardeners and is a difficult concept for young children. Gail Gibbons’ book, The Reasons for Seasons, attempts to simplify the basic principles and show the consequences of seasonal changes on people, plants and animals. Focusing on how the position of the Earth in relation to the sun causes seasons, the author also explains why the Southern Hemisphere has winter when the Northern Hemisphere has summer.

The opening page introduces the concept that each season has unique qualities. This is followed by a series of diagrams that illustrate and explain the tilt of the Earth, rotation of the Earth around the sun, and the effects of both the tilt and rotation on the seasons. The North pole, South Pole, and Equator are introduced. An explanation of the vernal equinox leads to a discussion of the natural phenomena associated with spring and the changing behavior of people and animals. Summer, Autumn, and Winter are treated in a similar fashion including a diagram of the Earth and sun for each season. The book concludes with concept that the seasons repeat themselves year after year.

The language is simple and the illustrations are pertinent. Although the diagrams are well done, however, they may be difficult for young readers to understand. On the other hand, the book can be read on two levels, one focusing on the nature and consequences of season change, the other on its causes. As the child matures and begins to question why seasons change and why the Southern Hemisphere differs from the Northern Hemisphere in this regard, the diagrams and accompanying text will become more relevant and enjoyable. This is an excellent book for introducing seasonal change to young children but is best used as their interest dictates.

To buy The Reasons for Seasons from Amazon.com click here.