Five Favorite Perennials for the Back of the Border 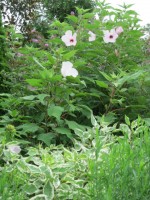 The back of a border presents certain problems that can be tricky to solve. You need something tall that will form a good backdrop for the mid and foreground plants over a long time and it must grow quickly to its full height but not so vigorously that it will push out other smaller plants. You want to avoid floppy plants unless you are willing to stake them and you want a disease resistance one so you don’t have to climb through your garden to spray it or pick off bugs. Finally be sure to consider the orientation of your border because those tall plants may create shade that you had not anticipated when you planted your shorter plants.To make the cut as one of my five favorite back of the border perennials, the plant had to be at least 4 feet tall but many are taller. 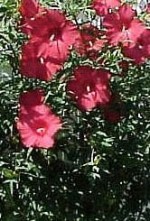 The first time I saw the flowers of rose mallow I was sure that it was a tropical plant and did not consider growing it. Then as I biked around my neighborhood and saw all the plants thriving I decided I must be wrong and that I would definitely look into growing it. Great decision! I now have a clump that comes up reliably every year and blooms away with little care. The size of the saucer shaped flowers, 7-10”, is enough to make it a standout but the color and number of flowers recommends it too. It is also an easy care plant that likes moist areas but will tolerate some drought once it is established and has no serious pest or disease problems.

Six weeks of a bright yellow color is provided by this bold plant that adds a rustic charm to the border. The petals are borne so densely that the typical sunflower center can not be seen, giving the flowers a dahlia-like appearance. Plants can tolerate some dryness but look their best when given a dousing during dry spells. Clumps grow quickly and can be divided every 2-3 years to propagate more plants. 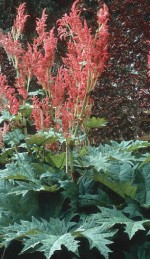 Even if you don’t like rhubarb pie this rhubarb is sure to impress you and maybe even win you over. Its shear size is nothing short of awesome but the show begins in spring when the leaves emerge and unfurl from a cigar-like red bud in the center of the plant. The large dissected leaves are burgundy colored when young but turn mostly green as they mature. Later in spring a 6-8 foot flowering stalk appears and produces clouds of small reddish pink flowers. Now that’s drama! 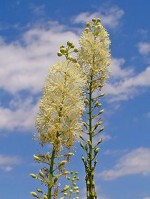 A native of eastern North America, black cohash inhabits woodlands with its large clumbs of attractive foliage from spring to summer and then puts up its tall wirey spikes of white flowers. These white wands of flowers persist for up to 4 weeks and are striking against a dark backdrop in a shade garden. 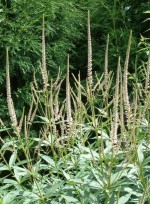 If you like the speedwells (Veronica spp.) you will probably like this larger relative. It adds the same vertical accent to the garden with its spikes of white flowers arranged in candelabra-like groups. A native of moist meadows in the eastern half of the U.S., it likes plenty of water during the growing season and just before it flowers.

These five perennials are all great plants and are easy to grow, providing color for at least several weeks in the back of the border. Of course, evergreen shrubs, and those with variegated foliage are good there too and could be used with the perennials to provide a variety of textures and shapes as well as color through out the year.