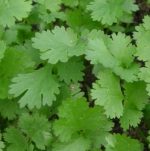 Also known as cilantro and Chinese parsley, coriander is a warm weather annual and a member of the carrot family, Apiaceae, that also includes celery, parsley, and Queen Anne’s lace.  It is native to southern Europe and the eastern Mediterranean but is widely cultivated elsewhere as a culinary herb including the US, mostly in California.  Growing 2-3′ tall, plants form a basal clump of pinnately compound leaves with the lower on  roundish and lobed, the upper ones finely divided and fern like.  The very small white to pinkish  flowers appear on short stalked umbels 2″ across and are followed by brownish yellow, spherical seeds.  The leaves, stems, roots and seeds are edible and popular in the cuisines of Mexico, south Asia, China, and Middle East.  The leaves and stem have a citrusy sage taste to most people but a soapy taste to some.  The roots have a similar taste  but are also nutty and the seeds lack the sage flavor and are citrusy.  Plants need fertile, light, well-drained soil and full to partial sun.   They have a long tap root and do not transplant well so seeds should be sown in place.   The genus name, Coriandrum, comes from the Greek word κορίαννον, koriannon, derived from  Greek word κόρις, kóris , meaning bed bug and refers to the foul smell of the unripe fruit.  The specific epithet, sativum, comes from Latin word meaning cultivated.

The use of coriander goes back to ancient times. It was found in King Tut’s tomb, was conusmed in 4th century BC China gain immortality, is mentioned in the Bible in regard to manna, and was brought to Britain by Bronze Age invaders.  Coriander was recorded on one of the Linear B tablets from 2nd millennium BC Greece and the ancient Greek physician, Hippocrates recommended the use of coriander as medicine.  The ancient Roman naturalist Pliny the Elder noted that the highest quality coriander was grown in Egypt. and Charlemagne ordered it to be grown on his royal farms.  During the Middle Ages and Renaissance, coriander was thought to be an aphrodisiac and the English Botanist Robert Turner thought that it “stimulated animal passions” when consumed with wine while the English plantsman Gerard commented on its foul odor.  The Spanish conquistadors brought coriander to Peru and Mexico where it became a popular culinary herb.  In colonial times coriander was used as a stimulant and spice.