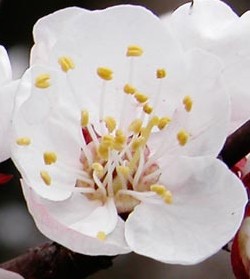 The apricot, Prunus armeniaca, belongs to the rose family, Rosaceae, that includes almonds, peaches, plums, and cherries. It is a small deciduous tree, 26-29 feet tall, with a rounded crown, and resembles a peach tree. The leaves are oval to heart-shaped, two to three inches long,and often covered with soft hairs on the underside. The one inch wide flowers are borne before the leaves emerge and have five white to pink petals. Although they are hardy to USDA zones 5-8 they bloom early and so are prone to frost damage. They need fertile, well-drained soil and full sun and are susceptible to several pests and diseases like other members of the rose family.

Shakespeare mentions the apricot three times. In Midsummer Night’s Dream (act. iii, sc1, 167), Titania, queen of the fairies, tells her servants how to treat Bottom, the weaver with the ass-head, with whom she has just fallen in love.

Be kind and courteous to this gentleman.
Hop in his walks and gambol in his eyes.
Feed him with apricoks and dewberries,
With purple grapes, green figs, and mulberries.

In Richard II (act iii, sc 4, 29) a gardener instructs his two servants how to tend the apricot.

Go, bind thou up yon dangling apricocks,
Which, like unruly children, make their sire
Stoop with oppression of their prodigal weight:
Give some supportance to the bending twigs.

Palamon, in Two Noble Kinsmen (act ii, sc 2, 291) bemoans his fate alone in a prison cell as he pines over his beloved Emilia.

As her bright eies shine on ye! would I were,
For all the fortune of my life hereafter,
Yon little Tree, yon blooming Apricocke;
How I would spread, and fling my wanton armes
In at her window; I would bring her fruite
Fit for the Gods to feed on:

Shakespeare’s spelling Apricocke suggests its derivation from the Latin praecos or praecoquus which means “early blooming”, which as noted above is true of apricot trees. The cultivation of the tree goes back to at least 3000-2000 BC when it was grown in Armenia and perhaps India. Alexander the Great introduced it to Greece and in the first century AD the Romans Pliny and Marital mention it. By the mid sixteenth century it was known in England although not common and in the seventeenth century the English colonists brought it to America.