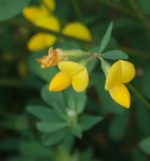 This herbaceous perennial is also known as eggs and bacon and bird’s-foot deer vetch and is native to grasslands of Eurasia and North Africa. It was introduced to the US from Europe by chance and was subsequently cultivated for forage and erosion control along highways.   Now it is found in moist, open areas  such as pastures, meadows, riverbanks, roadsides and waste areas throughout North America except the Deep South where it form dense mats that shade out the native vegetation.  It is especially troublesome in the prairies and grasslands of the Midwest.   Like other members of the pea family, it fixes nitrogen in the soil and is highly nutritious to cattle without causing bloating, so continues to be cultivated.

Plants grow up to 2′ tall from a long taproot with branched underground roots and above ground stolons and rhizomes. They have well-branched stems and alternate compound leaves with 3 leaftlets about .5″ long, the central 3 of which extend above the others giving rise to the trefoil part of the common name. From spring until mid summer,  rounded clusters of 2-8 bright yellow to orange flowers appear. Each pea-like flower is up to 2/3″ long and has petals sometimes streaked with red. The brown cylindrical seed pods are 1/4-1 3/4″ long, contain numerous seeds,  and look like bird’s toes giving rise to the common name bird’s-f00t trefoil/deer vetch. Plants spread by seed, stolons and rhizomes.  Common bird’s foot trefoil prefers full sun and moist soil but tolerates dry, droughty soil.   USDA Hardiness Zones 3-8

The following plants are native alternatives:

Also known as horsetail milkweed, this deep rooted herbaceous perennial is native to North America from Massachusetts and Saskatchewan south to Florida and Arizona where it grows in pastures, fields, prairies, meadows, open woods, and roadsides.  Plants grow 1- 3′ tall and have unbranched stems carrying whorls of needle-like leaves 2-3″ long that turn yellow at the end of the season and provide color to the fall garden. In mid to late summer, small, fragrant,  greenish-white flowers appear in flat-topped clusters in the upper leaf axils.  USDA Hardiness Zones 4-9

Long bracted wild indigo is a long lived herbaceous perennial native to central and eastern US from Michigan to Minnesota south to Kentucky and Texas where it grows in sandy prairies, savannas, roadsides, and dry open woods.  Plants grow 1.5 to 3′ tall and have grayish green compound leaves with 3 oblong leaflets.  In early spring, drooping  racemes 3-9″ long appear at the end of upper and outer stems bearing cream-colored to light yellow pea-like flowers. USDA Hardiness Zones 3-9

Yellow wild indigo is a herbaceous perennial native to south-central US from Missouri south to Alabama, and west to Louisiana, Oklahoma and Texas where it grows in prairies, meadows and pastures.  Plants grow 2-3′ tall and have yellowish green stems bearing trifoliate blue-green leaves with leaflets up to 2″ long.  From late spring to early summer, terminal racemes 12-15″ long carry pea-like yellow flowers well above the foliage. USDA Hardiness Zones 5-8.

Horsefly weed is a shrubby herbaceous perennial native to eastern US from Maine to Minnesota south to Georgia and Iowa where it grows in dry meadows, fields and open woodlands.  Plants grow 2-3′ tall and have smooth stems bearing blue-green trefoil leaves with three leaflets up to 1/2″ long.  The  cream to yellow  pea-like flowers are carried in sparsely flowered racemes  1.5-5″ long  from late spring to early summer.  USDA Hardiness Zones 3-9

Also known as wiry lotus, broom bird’s-foot trefoil, and desert rockpea, this twiggy perennial is a subshrub native to southwestern US and Mexico from Utah and California, south to northwestern Mexico  where it grows along roadsides, on dry slopes and plains, and in the Mohave and Sonora deserts.    Plants grow 1-3′ tall and have wiry upright stems covered with short bristly hairs.  The gray-green egg-shaped leaves are sparsely distributed along the stems and are compound with 3-4 leaflets 2-6″ long.  From late winter to spring 1-3 yellow pea-shaped flowers appear and slowly become tinted with red as they age. USDA Hardiness Zones 7-10

Sulfur lupine is a herbaceous perennial native to the prairies and sagebrush deserts of the foothills and lower mountains from British Columbia to Idaho and Oregon.  Plants grow 15 to 40″ tall and have a basal cluster of leaves as well as stem leaves that are palmately compound leaves with 9-11 narrow leaflets 1-2″ long.  From late spring through summer, purple, yellow or white  pea-like flowers appear in racemes .4 to 6″ long.  USDA Hardiness Zones 6-?

Also known as broom twinberry, this subshrub is native to the northern Mexico and southwestern US from  Texas, Arizona, New Mexico, and California to Colorado where it grows in deserts, scrubland, dry mesas, slopes, and meadows. Plants grow up to 2″ tall and have several many branched stems carrying oblong or oval leaves about 1/2″ long.   Reddish orange buds open to tubular yellow flowers carried in small loose terminal cluster from late spring into summer.    USDA Hardiness Zones 5-9

American senna is a herbaceous perennial native to eastern US from Michigan and Maine through the Appalachians and Atlantic plains south to Georgia where it grows in moist open woodlands, meadows, pastures, fields or roadsides.   Plants grow up to 6′ tall and have a sparsely branched  stout stem bearing compound leaves with 5-10 pairs of  oblong gray-green to medium green leaflets up to 2.5″ long. In mid to late summer yellow flowers appear in both terminal and axial heads or spikes up to 1′ long. USDA Hardiness Zones 4-7