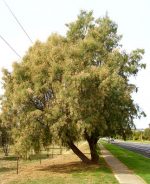 lso known as Athel pine,  this evergreen tree is native to arid and semi-arid subtropics and tropics in Africa,  Middle East and parts of southern and western Asia where it grows along watercourses.   It is a member of the Tamaricaceae, a small family of 78 species.  Growing from a deep and extensive root system, the tree grows rapidly up to 60′ tall and wide and has a dense crown with many stout branches and long weeping twigs. The bark of young plants is smooth and reddish but turns brown and furrowed with maturity.  The tiny, blue-green, overlapping scale-like leaves exude salt which may form a crusty layer on the surface that drips to the ground.  Two inch long spike-like clusters of  small pink to white flowers appear from spring to fall and give way to tiny seed capsules with a small tuft of hair. Photo Credit Bidgee-Wikipedia

Genesis 21: 15 (NIV) As  Hagar and Ishmael traveled away from Abraham their supplies ran out and they expected to die.

“When the water in the skin was gone, she put the boy under one of the bushes.”

“Abraham planted a tamarisk tree in Beersheba, and there he called on the name of the LORD, the Eternal God.”

“Now Saul heard that David and his men had been discovered.  And Saul was seated, spear in hand, under the tamarisk tree on the hill at Gibeah, with all his officials standing at his side.”

I Samuel 31:13 (NIV) After the Philistines killed Saul and his sons, the men of Jabesh Gilead took their bodies and prepared them for burial.

“Then they took their bones and buried them under a tamarisk tree at Jabesh, and they fasted seven days.”

Athel tree likes full sun and lean, dry soil in USDA Hardiness Zones 8-11 and tolerates saline and alkaline conditions. It is susceptible to mites, galls, and moths.  Propagation is by seed, division of sprouts and broken limbs. Trees are valued as ornamentals, shade trees, windbreaks, and barriers to fire.  They are harvested for food, medicine, tannins, and timber.