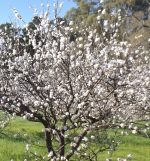 Native to central Asia, this deciduous small tree is a member of the rose family, Rosaceae, that also includes  cherry, almond, and lady’s mantle. The trees grow 26-39′ tall and have a dense, spreading canopy of ovate leaves 2-3.5″ long, with toothed margins and 2 small glands at the base of the blade.  In early spring before the leaves appear, white to pinkish flowers appear singly or in pairs.  They have 5 petals and give way to fruits called drupes that are fleshy, yellow to orange tinted with red, each with a single seed enclosed in a hard ridged stony shell.  Fruit production is very difficult because flower buds are very sensitive to early frost but the tree is well worth growing for its ornamental value.   Evidence suggests that the apricot was domesticated in China by 1000 BC and was introduced into Greece by Alexander the Great.   The growing of apples in ancient Israel, however, is dubious because of the heat  as apple trees require a cold period to produce fruit. On the other hand, we know that apples were grown in Lebanon, in many parts of the Roman Empire, and perhaps in the cooler hill country of Israel. Today new varieities of apples are grown in the northern hills of Israel and in Gaza. As a result of the controversy concerning the growing of apples in ancient Israel some schlolars translate the Hebrew word תַּפּ֫וּחַ as apple while others think that the biblical descriptions of  תַּפּ֫וּחַ make apricot, or possibly quince, a better translation.  Notice that Hebrew word פֶּ֫רִי  is used for the fruit of the Tree of Knowledge forbidden to Adam and Eve in the Garden of Eden but  is a generic term for fruit so has numerous possible translations.

Several Bible verses translate the Hebrew word אּישׁוֹן as “apple of the eye”, referring to the pupil of the eye, and these verses are not included below.

“A word fitly spoken is like apples of gold in pictures of silver.”

Song of Songs Also called the Song of Solomon, and Canticle of Canticles, this poem is about the spiritual and sexual love between one man and one woman and describes courtship and marriage customs of the times.  Although it is sensual it is also interpreted in religious terms as the relationship between God and Israel, or as an allegory of Christ and his bride, the Church.

3.“As the apple tree among the trees of the wood, so is my beloved among the sons. I sat down under his shadow with great delight, and his fruit was sweet to my taste.”

5.“Stay me with flagons, comfort me with apples: for I am sick of love.”

7.8 (KJV) The bridgroom responds to his beloved.

“I said, I will go up to the palm tree, I will take hold of the boughs thereof: now also thy breasts shall be as clusters of the vine, and the smell of thy nose like apples;”

8.5 (KJV) The friends of the bride ask her a question and the bride replies.

“Who is this that cometh up from the wilderness, leaning upon her beloved?”

Joel 1.12 (KJV) The prophet Joel urges the Jews to repentance, fasting, and prayer as they face the results of the locust plague.

“The vine is dried up, and the fig tree languisheth; the pomegranate tree, the palm tree also, and the apple tree, even all the trees of the field, are withered: because joy is withered away from the sons of men.”

Apricot trees like full sun and average, moderately moist, well-drained soil in USDA Hardiness Zones  5-8 but may not produce fruit reliably because of damage to flower buds by early frost.  The trees are susceptable to damage bymany insects and diseases.  Many varieties are available and propagation is by cuttings, budding, and grafting to preserve genetic make-up.

The genus name, Prunus, comes from the Greek word  προύνη, and is the Latin word referring to plum, also a member of this genus.  The specific epithet, armenaica, refers to Armenia, one of the geographic origins of the plant.