Two years ago we hosted the wedding celebration of some dear friends.  The idea of a September garden wedding started in June so we had plenty of time to prepare.  The bride and groom wanted to have a small wedding with the ceremony and reception outdoors.  We would provide the lawn and garden for the event and they were going to hire a bluegrass band for listening and dancing, and a caterer to serve southern barbeque.  What a fun wedding!

The bride and groom would enter the garden through a gate covered with jasmine. 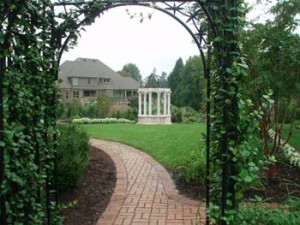 They would walk down the allee together as the band played. 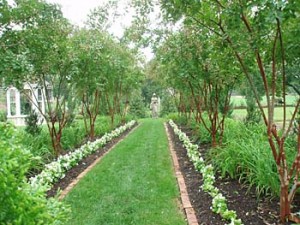 The minister would be waiting at the gazebo where the bride and groom would exchange vows. Guests would be on the surrounding lawn either standing or sitting at tables provided by the caterer. 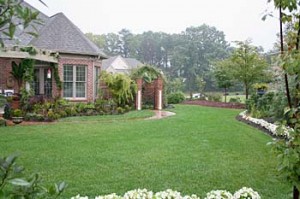 As the guest list and acceptances grew we decided to extend the reception area into the adjacent pool garden. 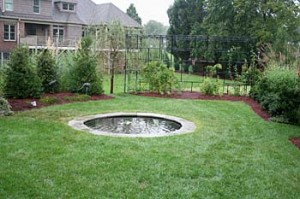 The band would be on the patio so that it had access to power and be near the great room where guests could dance. The driveway would be the staging area and garbage repository. Our job was to make sure that the lawn and gardens looked beautiful and provide An appropriate setting for this great event.  Guests would have free run of the gardens so we had to make sure that flowers were blooming everywhere.  We didn’t want it to look like a Hollywood movie set, but rather a real garden in central North Carolina, the home of the bride, groom, and most of their friends and family. 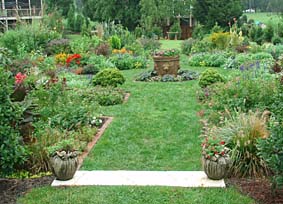 The garden was only in its second year in 2008 so the trees and shrubs were young and many were spindly.  The best thing we could do is emphasize the positive and hope that the eye would go to the pretty aspects of the garden and not see the works in progress.  The roses were especially challenging since I have many different kinds, each with their own rebloom cycle.  Eight to 6 weeks before the wedding I did a major cut back of all the roses hoping that in the ensuing weeks everything would regrow and be in bloom for the great event. I also fertilized them with a high phorsphorus fertilizer to stimulate bud and flower formation and topped it off with a special rose elixir made from alfalfa that is supposed to help the microbes in the soil benefit the roses. Most of the roses cooperated to some degree and produced flowers that provided color and fragrance. 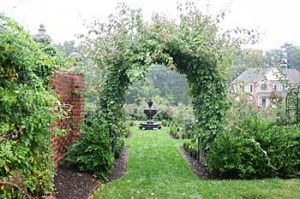 Some roses were much more cooperative than others.  Since that summer I have learned more about cycles of rebloom; in general roses with few petals rebloom more quickly than those with many petals.  Makes sense, but I didn’t know that at the time.  There are exceptions to the rule, of course, and I have several, so in the end cutting back at 6 weeks is fairly successful. The small walled garden attached to the house welcomed guests with a small seating area. 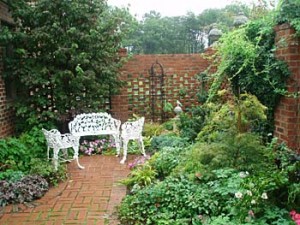 The garden is planted with small trees, shrubs, annuals and perennials with some garden ornaments placed here and there to provide scale and interest. 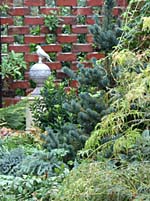 The formal garden had a ratty looking shrub hedge around it and many perennials, but I began early in May planting an abundance of annuals especially in the front of the beds. About 6 weeks before the weeding I cut back many of the annuals such as petunias, ageratum, salvia and gomphrena that I knew would regrow and rebloom, and gave them a shot of high phosphorus bloom booster. The red salvia came back like gang busters and provided a lot of color. Other annuals like portulaca, celosia and marigolds were left alone as they looked pretty good and did not seem to need refreshing. The petunias in the centrally located large pot rebloomed but not quite as much as I had planned and did not spill over the rim as I had hoped. The perennials, Sedum ‘Autumn Joy’, and the maidenhair grass came through like champs. The black fountain grass, ‘Moudry’, was blooming like a champ and the foxtail like blooms shimmered with the fine rain that fell throughout the wedding. Yes, the sad truth is the weather turned ugly and only a few brave souls went out into the garden in the rain.  Three days before we had terrible winds and the caterers could not even put up tents so all 165 guests left their umbrellas outside and crammed into the house. The celebration went on with the minister, band, and caterer doing their part inside and everyone seemed to have a good time, especially the bride and groom. Epilogue:  You would think that I would learn and not do this all over again but I didn’t learn and I did plan another event and worked for months to make the garden suitable.  You guessed it, it rained and virtually no one went out into the garden.  Can you believe, now 2 years later, I have already agreed to a third try at this?