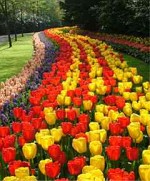 Tulips have been a favorite spring flower for hundreds of years. They were grown in Turkey as early as 1000 AD and were into Europe in 1572. They were called tulips after the Turkish word for turban and became very popular in Europe, especially Holland, by the 17th century. The bulbs sold for extremely high prices as ‘tulipmania’ took hold and Botanists began to hybridize them, making them more beautiful and decorative as time went on. Most of the tulips you buy today are hybrids and show a huge variation in characteristics. Here are some of the variations you might want to consider when buying tulips for fall planting/spring bloom.

Note Bene: The name of the class to which each tulip belongs is given before the cultivar name of hybrids in order to facilitate identifying the tulip if you decide to buy or learn more about it.

1. First and foremost, decide if you want tulips that will return every year and look good, or tulips that will look fabulous the first year and then decline to virtually nothing in 2-3 years. Most tulips you see are of the latter kind and you have to accept the fact that they will decline and so are best treated as annuals, pulled out after bloom, and new bulbs replanted the next fall. The tulips that will most likely return and multiply (naturalize) come in many different colors, sizes, and shapes but they generally are not as large and showy as the declining kind. Here are some samples of tulips that will naturalize:

Species tulips are the most likely to naturalize; they are also the smallest plants with the smallest flowers but they come in an amazing assortment of colors and color combinations. These are easy to find on line or mail order; John Scheepers, for example, carries 27 different kinds.

Other tulips that may naturalize if given the proper conditions. 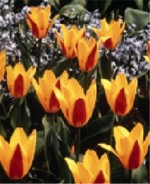 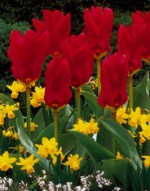 Although species tulips are fairly reliable return bloomers, the other tulips mentioned here are not so if you decide to try them, don’t be disappointed if they do not return or return but look bad. Avoid planting them in large drifts so when some return they will still look beautiful in their setting.

2. Color is probably what matters most to the majority of people. Tulips come in many different solid colors, vivid and pastel, including purple but not in true blue.

Some tulips have two tone flowers. 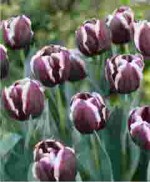 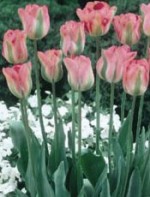 Some tulips have streaks that many people find very attractive. Originally these streaks were caused by a virus but modern look a likes are virus free. 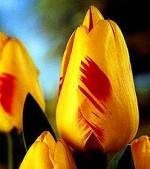 3. Color is not the only way tulip petals differ. They vary considerably in shape and ornamentations.

Crispa tulips have fringe on top of each petal. 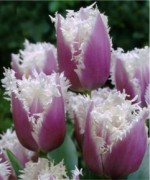 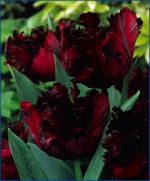 Other parrot tulips combine the fringe and scallops with exotic coloring.

Example: ‘Rococo’ ( cardinal-red with purple and green flames and feathering 14”, May bloom) 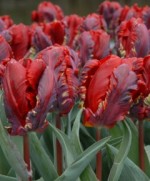 The Lily flowering tulips have deflexed petals giving them the look of a true lily in side view and a 6 point star from above.

4. Most of the tulips you see have a single set of petals but there tulips with double petals.

The double Late Flowering tulips have so many petals they resemble peonies. 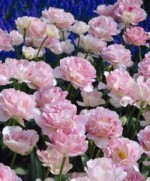 4. Tulip flowers vary in size. Flowers may be small. 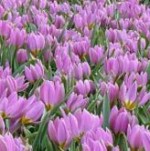 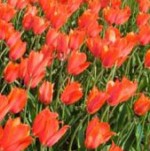 7. The appearance of the foliage varies. Most tulips have blue green leaves.

Some have green leaves with white edges. 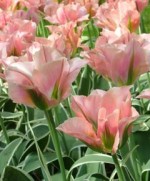 Other tulips are known for their marked and mottled foliage. 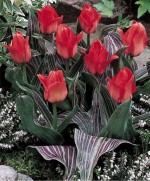 8. Some tulips are fragrant. 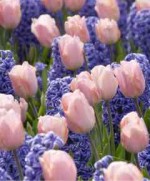 9. How you use the tulips might be an important consideration. The tulips of short stature are excellent in rock gardens. 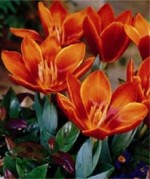 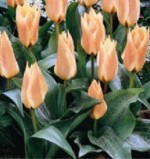 If you like to cut tulips for arrangements, the exotic look of the Parrot Tulips can’t be beat.

Example: ‘Green Wave’ (pale pink with green flames and a white base, 20” tall, May bloom) 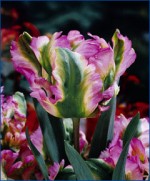 If you want to have a bouquet of tulips with one snip of the scissors try a Multi-Flowering tulip . 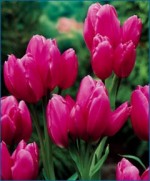 10. The time of bloom is probably important especially if you want a continuous bloom in the spring and/or want to coordinate the bloom of tulips with other bulbs like narcissus. The first tulips bloom in early spring.

The last tulips bloom in May. 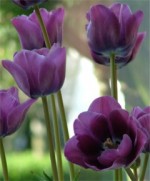 The examples used here suggest the huge variety that exists in the genus Tulipa.
With over 3,000 different kinds of tulips there are many combinations of characteristics so don’t be limited by what is shown here.